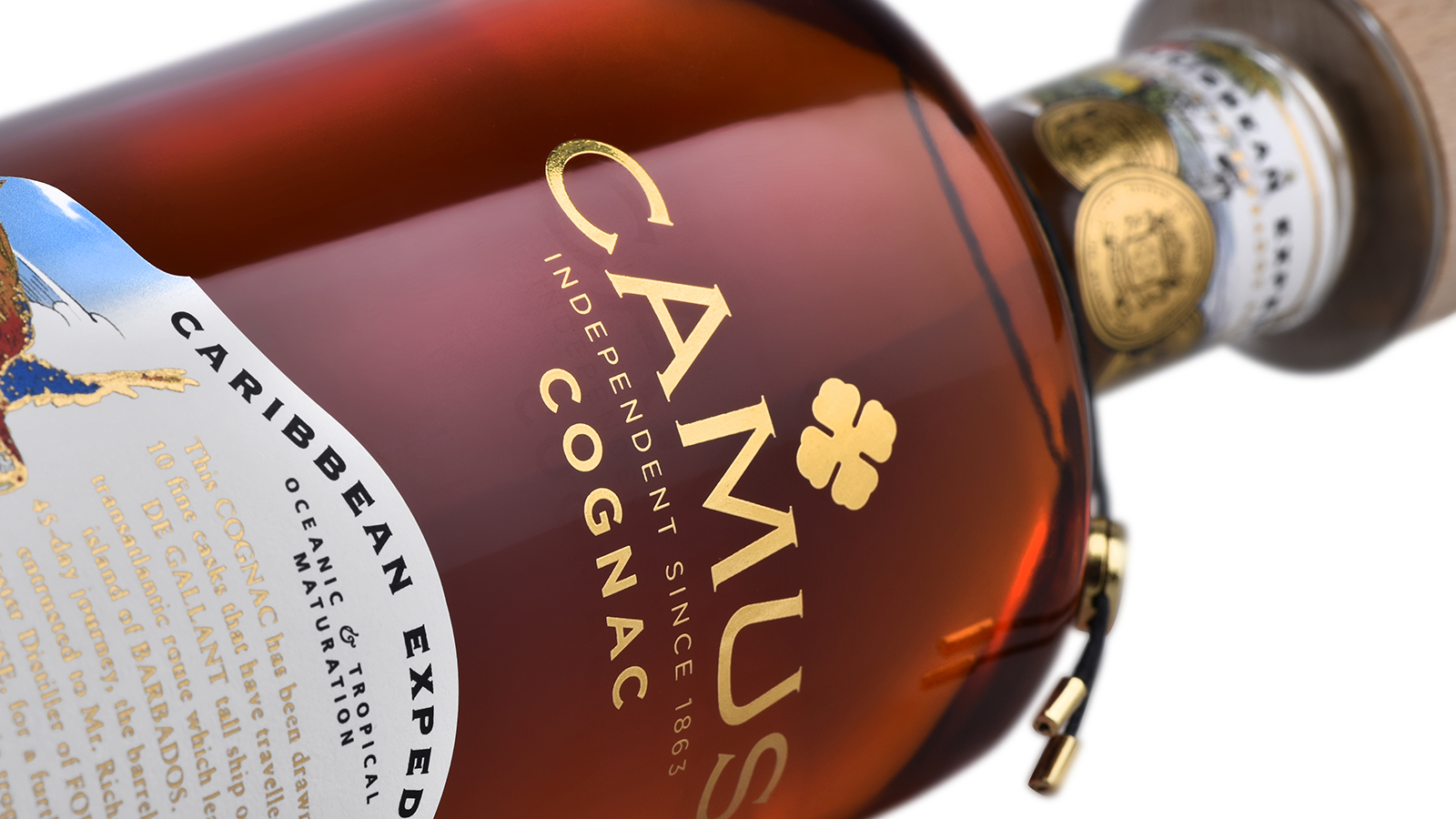 We often find it difficult to marry science and tradition, but that’s what famed independent Cognac house Camus has done with their Caribbean Expedition Cognac. Molecule manipulation and wind power both feel like modern ideas we’ve begun to harness over the past few decades to improve our lives and our planet. In the 18th and 19th Century, however, these processes were already impacting Cognac. Cognacs shipped in clipper ships were influenced by their journeys with the motion of the ocean and humid climates affecting the golden liquid inside casks.

This history and Camus’ innovative DNA inspired the creation of Camus Caribbean Expedition Cognac. At the time of ideation, the house was exploring ideas on “how to push forward the concept of Aromatic Intensity.” They decided to transport Cognac in its fourth year of ageing by sail to Barbados.

Once there, it spent another year in barrels at Foursquare Distillery under the watchful eye of Richard Seale, “the smartest Rum expert in the world and a true connoisseur of distillation and ageing process in Barbados.”

In this week’s Bottle Breakdown, we sat down with Camus Global Brand Manager Pier Paolo Catucci to discuss the inspiration, science, tradition, and journey that went into the creation of Camus Caribbean Expedition Cognac.

SZ: Rum has recently seen a sharp jump in popularity. Where did the idea for Camus Caribbean Expedition Cognac come from? And how long ago did the process of bringing this all together start?

PP: We are an independent, family-owned company, but in our DNA innovation is a key pillar. We call it the ‘science of tradition’. We were searching for ideas on how to push forward the concept of Aromatic Intensity in our Cognacs and, as always, we looked at what was done in the past: during the whole of the 18th and a good part of the 19th century, the Cognac trade around the world was transportation by boat and sometimes the casks would rest in bond warehouses around the world, undergoing further maturation in very different environmental conditions. So the idea came up: let’s use a traditional tall-ship to load some Cognac casks and let’s sail them to a Tropical island for a further period of maturation under very unique conditions.

Caribbean Expedition is a VSOP and after the 45-day journey to Barbados, it stayed on the island for a year, so from Grape to Glass, it took us more than 6 years to deliver this expression to Brown Spirits geeks!

SZ: What kind of grapes were used for the Camus Caribbean Expedition Cognac and where in Cognac were they grown? Is there anything specific about the terroir that would make them ideal for a transatlantic journey?

PP: As always in our blends, we use a high percentage of distillate from Borderies, as the particular nature of soil (chalky-limestone mixed with flint stones) produces wines with a high concentration of terpenols, resulting in deeply floral notes.

SZ: How did you go about choosing the Cognacs that would go on the trip? Were they all matured for a similar amount of time or is it a blend from various age statements?

PP: We chose a Cognac in its 4th year of ageing, so that the basic process of esterification had already done its first course, expecting for an acceleration during the year of Tropical ageing.

SZ: During the 18th and 19th Centuries, sea maturation was part of the Cognac making process, but that ended with the advent of glass bottles and AOC specific rules. Why did Camus want to go through the process of sea maturation again?

PP: The introduction of glass bottles and specific AOC rules led to a completely new commerce for the Cognac Houses. This change effectively cut out the period of “sea maturation” to which every Cognac was exposed before and which would undeniably influence the evolution of the liquid after the journey.

SZ: How does sea maturation affect the aromas and flavors of the spirit?

PP: It simply enhances some very specific reactions leveraging aromas, which would have happened at a much slower pace in mainland weather conditions. For example, the continuous shaking and stirring of the Cognac inside the barrel, caused by the movement of the ship while sailing, amplified the contact between each molecule of the liquid and the wood staves, accelerating the extraction of aromatic components from the barrel.

Heat also accelerates many chemical reactions which are part of the maturation process. As the ship crossed different climatic areas, entering into very warm zones, some of the crucial processes of maturation, such as oxidation with formation of aldehydes, had the chance to happen sooner. At the same time, the continuous change in the atmospheric pressure increased the mechanical effect of contraction and expansion of the oak wood staves, accelerating the process of oxygen consumption.

SZ: It took about 50 days for the Cognac to reach Barbados. Was there anything particularly notable about the expedition across the Atlantic?

PP: As always in this route, having the favour of the winds is crucial and for us it was exactly like that. After only a few days at sea, the weather conditions slowed the ship down, becoming sufficiently rough to prevent it from sailing around the Bay of Biscay. In the following days the crew did not manage to reach the northwest flow that could have given a bit of a head start on the incoming gale. This didn’t allow the ship to reach A Coruña and forced the captain to adopt a South/Southeast route. Waiting for more favorable winds, the ship stopped in Gijon. Given the time remaining to catch up on the total duration of the trip, the planned stopover in Madeira had to be canceled and the ship sailed back on its trip at a speed of 5 knots. The descent along the coast of Portugal proceeded slowly and the winds began to propel the ship only off the coast of Morocco, facilitating a docking on Tenerife for an intermediate stop along the journey on December 19th. After just one day, the De Gallant left the Canary Islands, sailing at an average speed of 7 knots along the coast of Mauritania. From there on, the descent proceeded quietly until Cape Verde, where the ship finally headed west towards Barbados.

SZ: Why was it important for Camus to use wind power rather than a machine engine to get the Cognac across the ocean?

PP: Transport by sail is traditional but at the same time future-oriented, as we are. Wind energy allows the transport of goods at both regional and international levels, while considerably limiting CO2 emissions compared to conventional modes of transport. We collaborated with a company called TOWT that specializes in this type of transport since 2011 and we loved it.

SZ: Why did Camus decide on the island of Barbados rather than an overseas region of France like Martinique, which also has a strong rum making history?

PP: It’s a rather unique climate, and this is where Richard Seale was based, which was very important for us in terms of collaboration.

SZ: For those of us who don’t know, who is Richard Seale and what is it about Foursquare’s incredible reputation that made Camus want to work with them?

PP: Foursquare is a family-owned activity, run generation after generation by the Seale family: Richard is the great-grandson of the original R.L. Seale, Reginald Leon Seale who founded the company in 1926, making him the fourth generation to work in the family rum, with an historical heritage very close to that of the Camus family. On top of that, Richard Seale is genuinely the smartest Rum expert in the world and a true connoisseur of distillation and ageing process in Barbados, so we simply couldn’t find a better person to host our casks.

SZ: How does ageing in a tropical climate affect the aromas and flavors of the spirit?

PP: In order to legitimate our experiment and objectively measure the changes that would occur to the liquid in this period and compare them to a normal maturation in a continental climate, we kept a cask of the same cognac at our distillery for the same period and subsequently compared the two liquids through a chromatograph. Results of the analysis show a significant contribution of the wood tannins, which give greater structure and complexity compared to an equal maturation in a continental climate. The aromatic components represented by esters have also undergone a much greater increase compared to the liquid matured in Europe, with fruity and spicy notes having a higher impact on the palate. This experiment clearly shows a more significant aromatic evolution of the liquid left for one year in Barbados due to the higher temperature and humidity of a tropical climate responsible for accelerating normal esterification processes. And I would add that the array of flavors obtained through this process represents an exclusive primacy in the history of Cognac.

SZ: The label and bottle design are absolutely gorgeous. Can you tell us a little about the inspiration behind them?

PP: We wanted to encapsulate all the key elements of this adventurous experimental project in our label, with visual hints inspired by the two iconic sites to which this Cognac is linked: France, through the port of La Rochelle and Barbados, through the port of Bridgetown. We worked with Breeze Creative Design Consultants, one of the best design agencies in the business, which recently won Whisky Magazine’s award Design Agency of the Year 2020.

SZ: How should we enjoy Camus Caribbean Expedition Cognac? Neat, on the rocks, in a cocktail?

PP: I would say neat, in a nice tulip glass, maybe pairing it with some candied fruit like pineapple or mango.

SZ: We absolutely adore this Cognac. Is there any chance that Camus might make the voyage all over again?

PP: As I said at the beginning of this interview, innovation is at the heart of our process, so no doubt there will be more and more products from our side with the same approach behind them.