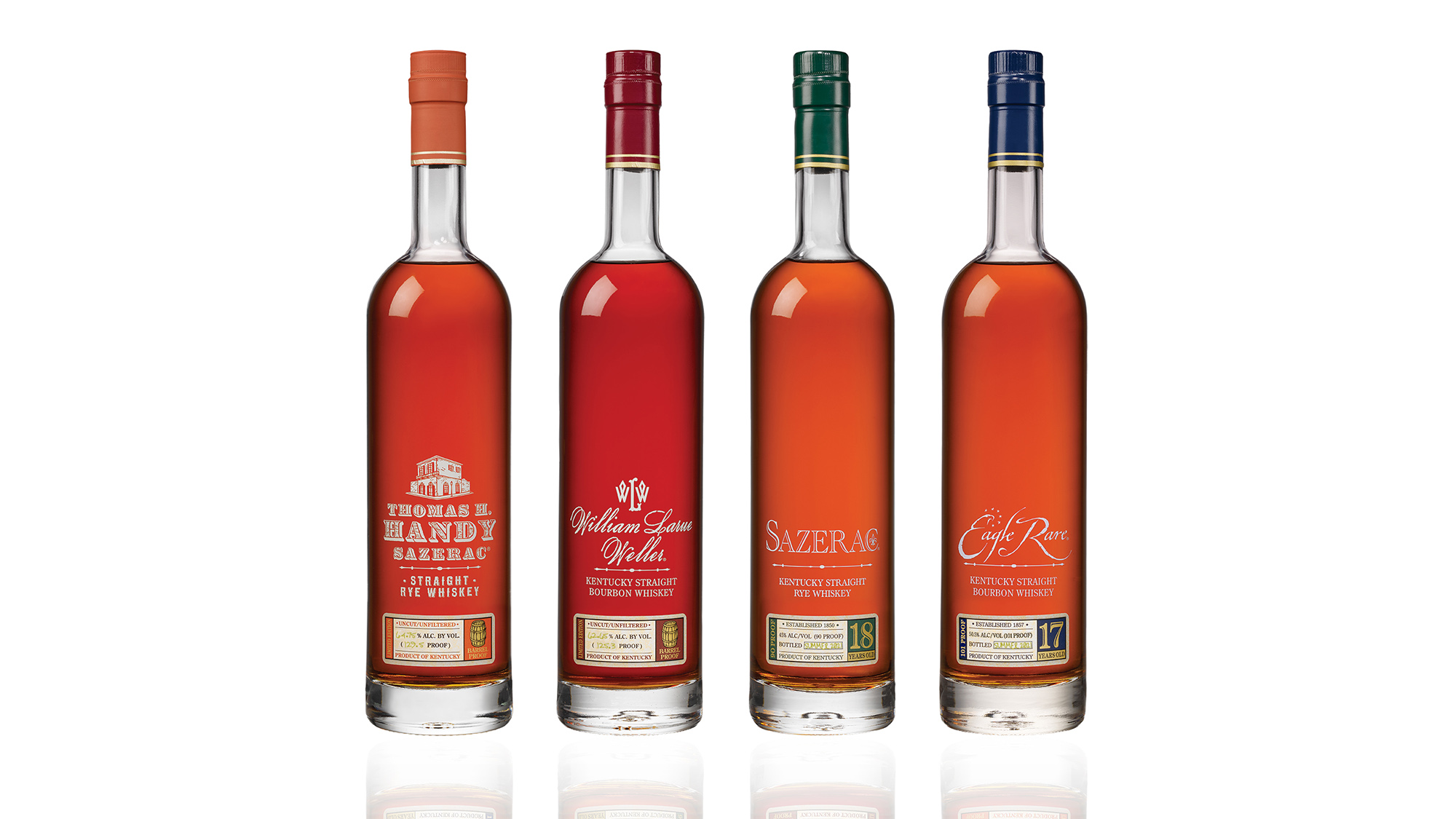 Buffalo Trace Distillery has unveiled its 2021 Buffalo Trace Antique Collection (BTAC). This year’s ensemble of whiskeys features bottlings of various ages and proofs, ranging from uncut and unfiltered whiskey to whiskies as old as 17 and 18 years.

The  2021 Buffalo Trace Antique Collection is made up of four whiskeys, William Larue Weller, Thomas H. Handy Sazerac Rye, Eagle Rare 17 Year Old, and Sazerac Rye 18 Year Old. This year, however, the lineup won’t include George T. Stagg because the 15-year-old barrels do not meet the Distillery’s taste standards for the Stagg brand.

“Before any barrel can be dumped and bottled, it goes through rigorous testing procedures numerous times to ensure it is meeting the quality standards set forth for that brand,” said Master Distiller Harlen Wheatley.  “Unfortunately, this crop of barrels earmarked to be Stagg back when it was put in the barrel in 2006 did not meet the Stagg profile today. We discussed at great length how to proceed, and ultimately decided we did not feel right about lowering our standards or the age, by dipping into next year’s supply of barrels.  We know fans will be disappointed, as are we, but we could not release a bourbon that we did not feel was up to par with the flavor profile expected of George T. Stagg.”

There are various measures of quality tests administered to all of Buffalo Trace’s bourbon, everything from checking turbidity and testing samples using gas chromatography. But the most discriminating test of all is the human palate. A team of taste testers, who have all gone through sensory analysis training, taste each barrel sample brought to the laboratory at Buffalo Trace to ensure each barrel matches brand standards before it is dumped to be bottled. If one taster disagrees, the barrel is sent back to be aged longer.

“Quality is always paramount for our products,” said Drew Mayville, master blender, director of quality. “If the taste doesn’t match our expectations, then we will not release it to our customers.  And unfortunately, this year’s yield of Stagg did not meet our expectations.  Good news is, we’ll have the barrels we put up in 2007, which are on track so far for a 2022 release, barring anything unforeseen changes.”

As for the four whiskeys that will be features in this year’s collection, here are details of each:

The Antique Collection’s uncut, unfiltered, wheated recipe bourbon is William Larue Weller. The previous release of this wheater was honored with an “Extraordinary/Ultimate Recommendation” at the 2020 Ultimate Spirits Challenge. The 2021 release was distilled in the winter of 2009 and aged in Warehouses C, D, K, L and Q. This bourbon registers at 125.3 proof. A nose of crème brulee, followed by cherry and toasted graham crackers on the palate and a long rich finish of coca, herbs and oak can be found in this year’s offering.

Thomas H. Handy is the uncut and unfiltered straight rye whiskey. Last year’s release earned a Double Gold Medal at the 2020 San Francisco World Spirits Competition. This year’s Handy was distilled in the spring of 2015; aged in warehouses I, L, O, and K and weighs in at 129.5 proof. The flavor profile includes anise and cinnamon with a rich finish of spearmint and chocolate.

This 101 proof whiskey was distilled in Spring of 2002 and aged on the first floor of Warehouse P. The 2019 Eagle Rare release was honored with “Best of Category” at the Los Angeles International Spirits Competition. This bourbon has a nose of ripe cherries, vanilla cream and oak, followed by a taste of caramel and coffee and a long finish of oak, pepper and fresh herbs.

The previous edition of Sazerac Rye 18 Year-Old was named “Best Rye Whiskey Over 15 Years” in the 2021 “Whisky Bible.” This 2021 straight rye whiskey release has notable flavors of bright apples and herbs, anise and maple syrup on the palate and a finish of cocoa, coffee and dates. The barrels for this whiskey were filled in the spring of 2003 and it rested on the second and fourth floors of Warehouses K and P. It is bottled at 90 proof.

The Antique Collection was introduced more than two decades ago. The 2021 Buffalo Trace Antique Collection whiskeys will be available in limited quantities starting in late October and each are priced at $99 per bottle.
For more information, head over to the collection’s official webpage.