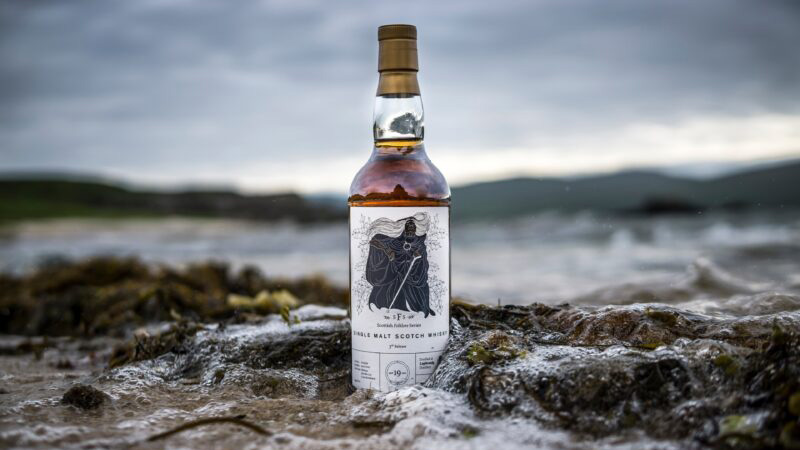 Cask 88 has added a 19-Year-Old Laphroaig 2001 Single Malt: Cailleach Beira Scotch Whisky to its Scottish Folklore series. This is the third release in the series from the broker and independent bottler. The Whisky was made to represent Cailleach Beira, the Queen of Winter.

The cask selected for the Cailleach Beira was distilled in 2001 at The Laphroaig Distillery in Islay, Scotland and placed into a refill hogshead for 17 years before being re-racked in October 2017 into a 1st Fill Château Léoville-Las Cases Bordeaux barrique. It is released as a single cask expression with just 270 bottles produced.

According to the bottler’s tasting notes, the nose of the 19-Year-Old Laphroaig “starts sweet and musty, like freshly trampled grapes. There’s a richness like black cherry jam on wholemeal toast. The toasted note becomes a full burning peat fire within a few moments, undercut by grated nutmeg and Laproaig’s distinctive algal iodine.” The palate is “dense and chewy on the tongue, like a dark malt loaf studded with dried cherries and pecan nuts. A heavy oakiness is a solid anchor, around which flavours of honey-glazed ham, smoked paprika and laver cake coalesce.” The finish is described as, “Once the smoke has cleared (which takes a little while), there’s a lingering note of after-dinner brandy and praline chocolates. Those ones that are shaped like seashells.”

Of the 270 bottles produced, only 258 have been made available for purchase. Bottled at 53.9% ABV, the Whisky comes in at £475 ($600 USD) per 700ml bottle and can be purchased online via Cask 88’s official website and the Whisky Foundation’s official web store.

Cask 88 director Patrick Costello said: “This particular single cask caught our attention because of its complex and brooding personality that reminded us of Cailleach Beira herself. Originally intended as a warming dram to guide through the change of seasons, changes to our release schedule have given our Cailleach Beira the chance to walk in the sun.”