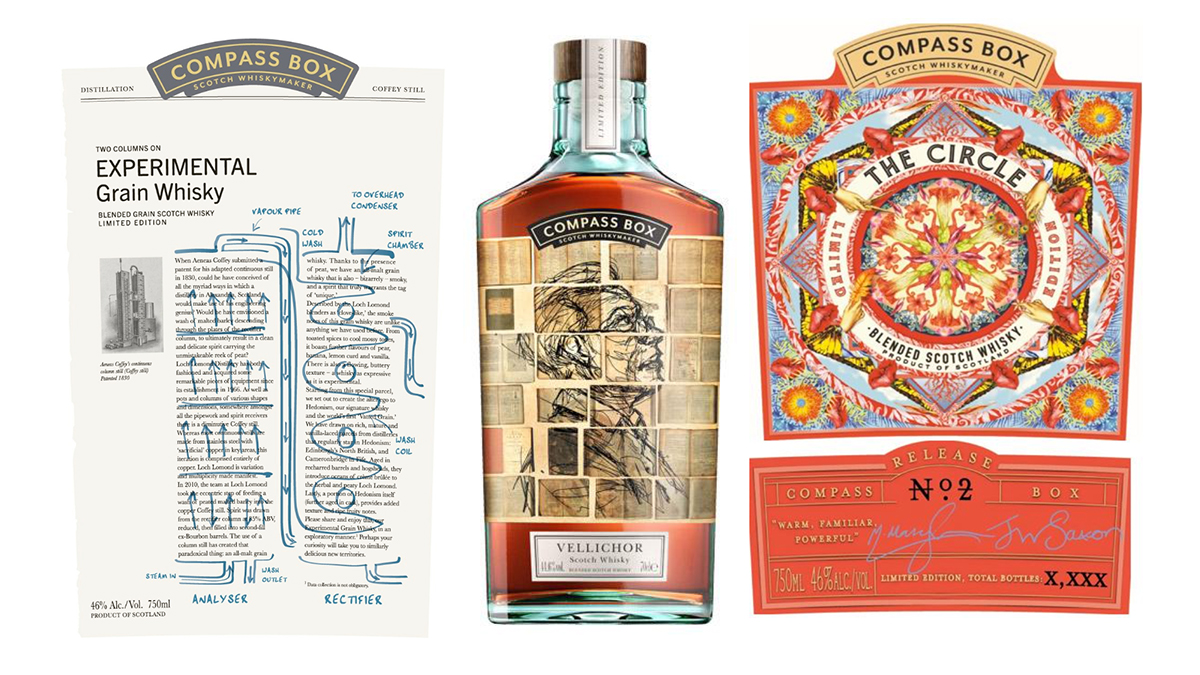 Compass Box has unveiled three limited-edition whiskies it will be releasing during the first half of 2022. The upcoming offerings are Vellichor, Experimental Grain Whisky, and The Circle No. 2.

‘Vellichor’ is a new word and refers to the aromatic atmosphere within second-hand bookshops. For this project, Compass Box combined complex and impressively mature whiskies from renowned distilleries (Macallan, Highland Park, Caol Ila), as well as parcels of blends that have been aged for many years in ex-Sherry butts, to encapsulate the unique fragrance.  The release will be available from the brand’s web shop and select rest of world regions from early February. It arrives in the US on April 1st.

Experimental Grain Whisky is a “fascinating discovery, borne from the pursuit of unusual flavour and a grain whisky that’s only a pot still away from being a single malt. Smoky, sweet and curiously delicious.” It will be available from the brand’s web shop and select rest of world regions from early February. It arrives in the US on April 1st.

The Circle No. 2 is “a whisky brought to you by synaesthesia,” says the brand. “The Circle’s Sherry-aged warmth and bright tropical aromas perfectly capture the taste of the colour coral. Made in collaboration with The Circle 2019 winner, Mannie Monaghan.” It arrives in June 2022.

In September, Compass Box unveiled the latest addition to its signature range, Orchard House. The new fruit-forward and spirit-driven blended malt Scotch whisky is described as a “standout all-rounder.” In July, the brand announced a limited edition, Canvas Blended Malt Scotch Whisky, featuring whisky aged in Vino Naranja casks. The whisky is meant to artistically inspire consumers by engaging them through the opportunity to create their own label design. In March, Compass Box launched Menagerie whisky, which is the Scotch whisky bottler’s “answer to the call of the wild.”