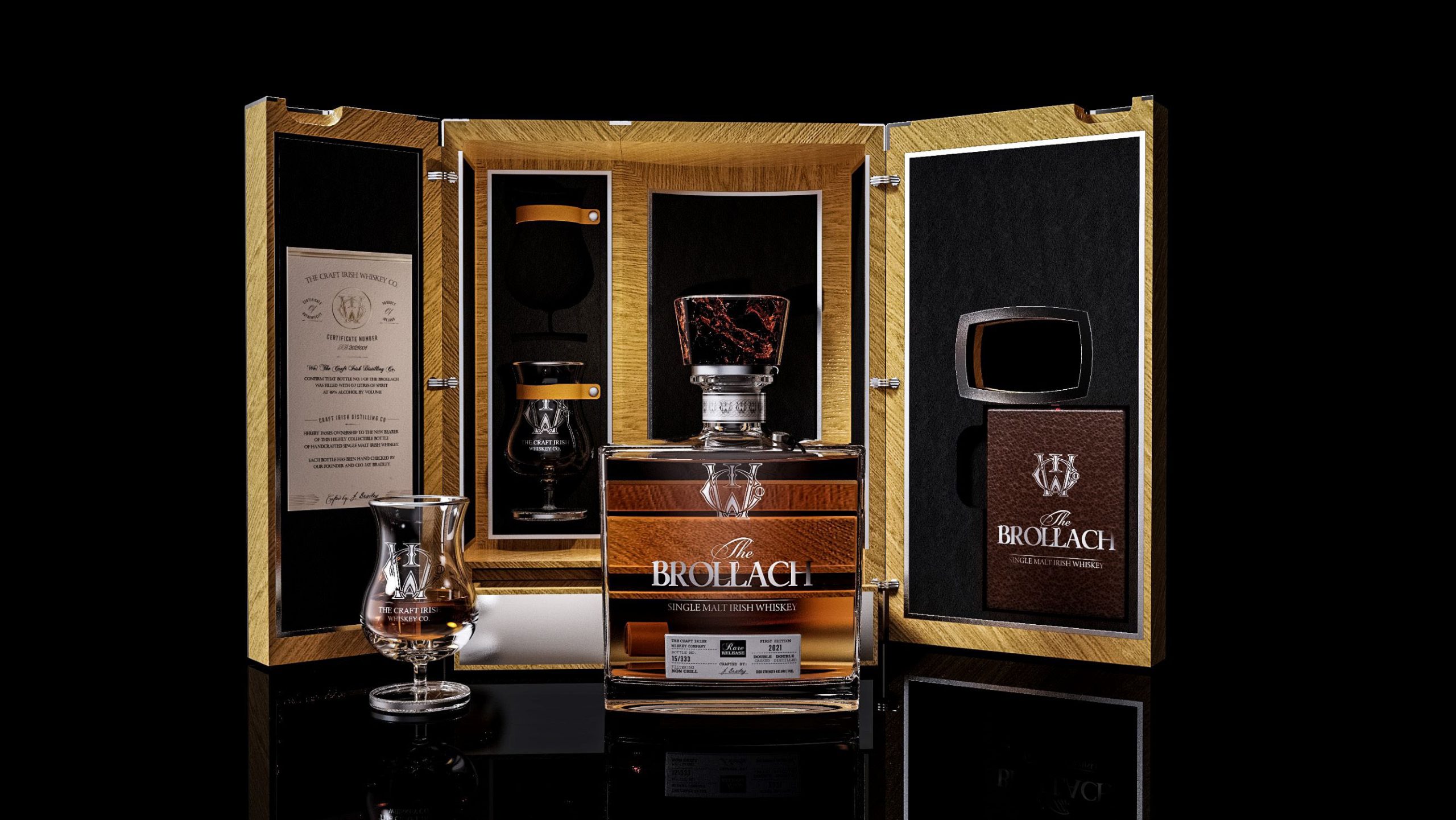 The Craft Irish Whiskey Co has announced its third release, a rare double-distilled, single malt Irish whiskey, named The Brollach. The new offering from the Irish spirits makers has been matured for over two decades and will first be made available on Father’s Day (June 20, 2021).

The Brollach is a personal tribute to Founder Jay Bradley’s late father, who sadly passed away in 2020, but was a huge inspiration for creation of The Craft Irish Whiskey Co. Together they shared a passion and knowledge of whiskey, with the dream of building a legacy and creating the finest Irish whiskeys. The latest release has been named after the O’Brollachans, which is the ancient rendering of the Bradley name and represents their Irish heritage, lineage and craftsmanship.

Jay had an entrepreneurial spirit from a young age and left school at 14 to work as a furniture craftsman with his father in Ireland until he was 19. On 21st January 2001 Jay left the Emerald Isle and moved to Australia on 22nd January 2001 to follow his dreams and embark on adult life. To honour this huge milestone in Jay’s life, The Brollach has been distilled on the same day: 22nd January 2001.

Located within close proximity to where Jay Bradley was raised, The Brollach was matured on the southeast coast of Ireland using the Irish water and barley aged in 200-litre ex-American bourbon casks, which add a deep oaky flavor to the whiskey, and then finished in 128-litre rare French Oak Madeira barrels, emerging when it is at its zenith. French Oak Madeira is made exclusively on the island off the coast of Portugal and the 128-litre barrels achieve the perfect spirit ratio based on the flavor profile of the Madeira.

Years of maturation imparted flavors of honeysuckle, butterscotch and caramel to create a whiskey that is both masculine and intimate, which brings a fresh, intense and potent profile. Irish whiskey is traditionally triple-distilled, however, The Brollach has been double-distilled to symbolise the powerful bond between father and son.

Crafted from raw Nordic oak and brushed with stainless steel, The Brollach’s experience box celebrates Irish craftsmanship, paying homage to the Bradley family’s Celtic heritage and honors Jay’s father as a master craftsman, with its strong, bold and masculine design. It features a heavy grain on the box, which leads the eye towards the clasps and the stainless-steel trim. The box also contains a 70cl bottle of The Brollach, along with two handcrafted Finn glasses.

The Brollach bottle sits in a solid oak plinth, with a slightly curved backdrop that echoes the lines of a barrel, and the interior is a rich, dark suede, set against a foam protector. The drawer, which sits underneath, contains four obsidian whiskey stones, a glass and anodised silver pipette, and two vials; one for a taster of whiskey and the other for the user to add Irish spring water (or his / her preferred one) to open the flavors.

“Whiskey is my absolute passion in life and The Brollach is a very personal release to me as it is a tribute to my late father The Craft Irish Whiskey Co. was born out of a conversation with him and our shared interest for the finer things in life particularly whiskey craftsmanship,” said Jay.

The Brollach follows the success of the brand’s first release in November 2020, The Devil’s Keep, a 29-year-old, triple-distilled, single malt whiskey. The Devil’s Keep achieved the world record for the most expensive inaugural whiskey release ever at auction at USD $60,000 (almost £46,000 and €51,000).

The Craft Irish Whiskey Co. also partnered with Fabergé to unveil ‘The Emerald Isle Collection’ in February 2021 – a seven-piece custom-made whiskey set which features two bottles of ultra-rare 30-year-old, triple-distilled Irish whiskey, along with two exclusive creations from Fabergé. It was crowned the oldest triple-distilled Irish whiskey in the world and the inaugural experience box sold at auction for a record-breaking USD $2 million.

For further information on The Craft Irish Whiskey Co and The Brollach, visit the official website.