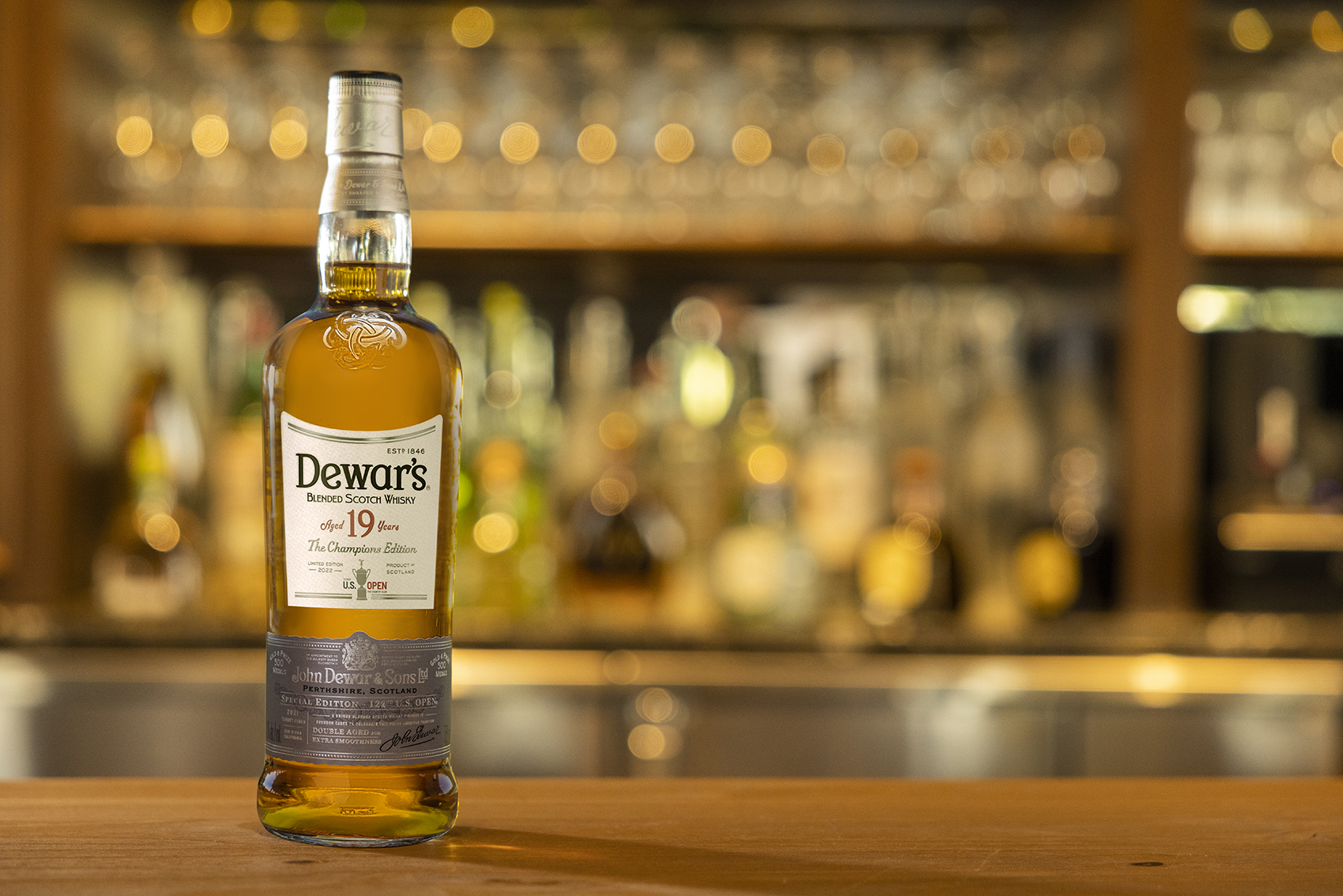 Composed of up to 40 different single malt and grain whiskies and inspired by the rich legacy and ethos of the U.S. Open, “From Many, One”, this celebratory bottle highlights that from many casks, one champion blend emerges. The whisky is rich and complex, featuring notes of heather, honey, butterscotch, and cinnamon spice with a rich and fruit forward finish.

“When creating this blend of scotch whiskies, I wanted to ensure the craft and traditions of over 175 years of Dewar’s whisky distillation and blending in Scotland were fully enhanced by the best of American wood and cask aging. We took pristine new American oak casks that have never been used to age either bourbon or sherry prior to this 19-year-old scotch and we finished many of this blend’s components in these. Then we took ex-Bourbon and ex-Rye whiskey casks to finish other components in it. The result is a Dewar’s 19-year-old whisky, that on the nose has a combination of vanilla and wood spices, followed on the palate by flavor notes of dried apricot, butterscotch and hints of vanilla.” says Stephanie Macleod, Master Blender for Dewar’s. In fact, this 2022 edition received a 93-point rating from the award-winning WhiskyCast with more accolades are sure to follow.

A special addition to the 122nd U.S. Open Championship this year is the “Dewar’s Lemon Wedge”, a twist on the classic “Highball”, which will serve as the official cocktail of the U.S. Open. The recipe features Dewar’s 12-year-old whisky, club soda, fresh lemonade and is topped with a golf tee pick and lemon wedge for garnish. For those who cannot make it to the course but want to raise a toast to the game with the signature cocktail at home, Dewar’s has created a cocktail kit via Cocktail Courier available nationwide.

“With its bold and balanced flavor profile – aged 19 years in honor of the final round at the 19th hole – Dewar’s “The Champions Edition” is designed to celebrate the brand’s deep ties to the sports world, where it has sponsored numerous sporting events, competitions, and teams across the globe since the 1890s,” noted Brian Cox, Vice President of Dewar’s North America. “We’re thrilled to continue this partnership with the U.S. Open® and this year introduce the “Dewar’s Lemon Wedge” onto the fairway (or rather the bars around it)! This cocktail puts a twist on the beloved highball, showcasing how the world’s most-awarded blended Scotch Whisky is putting a new spin on a classic, once more linking the worlds of golf and Scotch Whisky just in time for the 2022 U.S. Open and Father’s Day.”

Method: Combine ingredients over ice and stir for desired dilution. Garnish with lemon.

In addition to this partnership, a portion of the proceeds from the custom silver bottle, which serves as a nod to the U.S. Open trophy, will benefit the USGA Foundation, which celebrates and serves the game of golf and all who love and play it.

To accompany the new bottle and signature cocktail, the brand has created a suite of Dewar’s accouterments to celebrate the season. From a signature Dewar’s golf cooler created by Vessel to a custom Dewar’s golf cart, which will be serving cocktails at events through the final round on Father’s Day, the brand is putting its mark on the game of golf in full swing.

As part of the multi-year agreement with the United States Golf Association (USGA), Dewar’s will produce a special limited-edition commemorative bottle for each year’s U.S. Open, to be sold online and at all fine wines and spirits retailers, as the official Scotch whisky and proud supporter of the US Open Championship. This year’s tournament is scheduled for June 16-19 at The Country Club in Brookline, Mass.

Bottled at 43% ABV, Dewar’s 19 Year Old The Champions Edition is priced at $79.99 per 750 ml bottle. It can be found in all fine wine and spirit retailers or online via the brand’s official webstore.

In January, Dewar’s unveiled the latest addition to its Double Double series with the release of a 36 Year Old bottling.