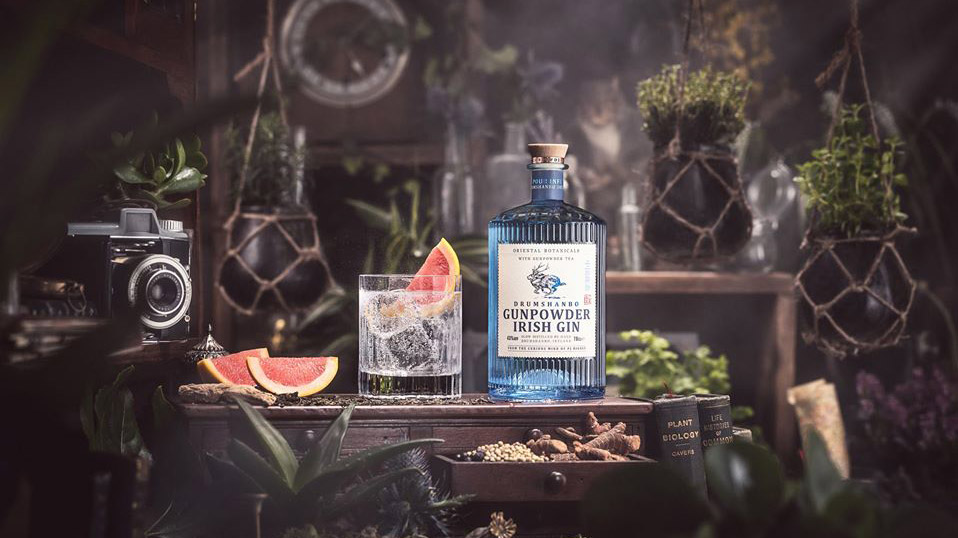 Drumshanbo Gunpowder Irish Gin comes from The Shed Distillery in County Leitrim in the north of Ireland. Brainchild of P.J. Rigney, who once worked as executive director of Baileys, the Gin and its 12 botanicals act as a record of its creator’s travels. It receives its name from the slow dried Chinese gunpowder tea that is one of its key ingredients. It’s a spirit that is about bringing together uncommon ingredients to make something unique and of the highest quality.

Drumshanbo Gunpowder Irish Gin’s ingredients come from across the globe. Meadowsweet from its hometown of Drumshanbo, Ireland, cardamom and caraway seed from India, juniper berries from Macedonia, coriander seed from Romania, angelica root from Germany, orris root from Morocco, and, of course, gunpowder tea from China, where the spirit also gets its Star anise. Lemon, Oriental grapefruit, and kaffir lime are also part of its makeup.

The Gin has received praise worldwide and in 2019 won the Best Gin “Oscar” at the famed Flaviar New York Spirit Award, one of only five spirits to receive an award of 22,000 entrants.

Gin isn’t the only thing being cooked up at The Shed distillery either. Currently a large stock of whisky is aging its way towards maturity and its first bottling was released in late 2019. Making Gin that tides you over while you wait for a Whiskey to become ready is somewhat of a modern Irish tradition. And now, the Whisky is finally available as well. To note Prince Albert of Monaco was among the first purchasers of the “grand-cru Irish whiskey.”

The Shed Distillery has also created Sausage Tree Vodka, which is made by marrying Irish Grain and the Kigelia Africana, also known as the “Sausage Tree.” With it, Rigney has sought to create “nature’s purest Vodka.”