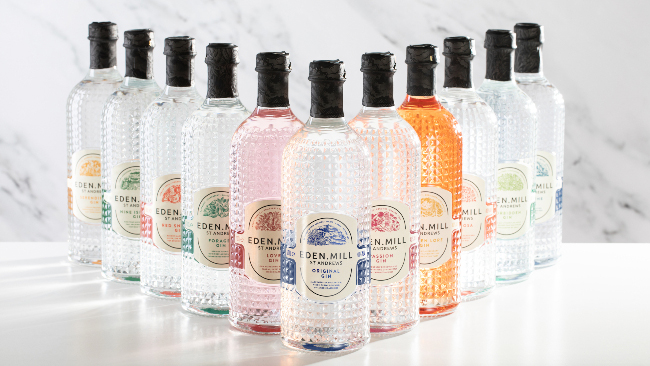 Eden Mill has unveiled nine new gins as well as an updated bottle design as it ramps up its sustainability and expansion efforts. Formerly bottled in ceramic, the St Andrews-based distiller has repackaged its Original Gin in a 700ml bottle that uses 18% less glass than the industry standard.

Tony Kelly, CEO and co-founder of Eden Mill, said: “Standardising our bottle production across all of our gins to this more sustainable design will greatly help us reduce waste, as we continue to push boundaries and move a step closer to a brighter, cleaner, clearer future for our distillery and the spirits industry.”

Along with the new bottles, Eden Mill has released a new line of nine premium gins: Red Snapper Gin, made for use in brunch cocktails; Forager’s Gin, made with berries from endangered St Andrews hedgerows; Passion Gin, with passionfruit and coconut; Rosa Rosa Gin, with rose; Forbidden Gin, inspired by the garden of Eden, with quince and apple; Golden Lore Gin, with orange; Neptune Gin, with samphire and kelp; Nine Islands Gin, a blend of Thai botanicals; and Serendipity Gin, with dandelion and burdock.

The redesign and product launches are part of a wider push for sustainability and growth for the brand. Eden Mill recently quadrupled its bottling capacity by opening a new bottling and distribution facility in Glasgow and signed a UK distribution deal with La Martiniquaise-Bardinet, and also plans to open a new £10 million carbon-neutral distillery in spring 2022.

For more information, head over to Eden Mill’s official website.