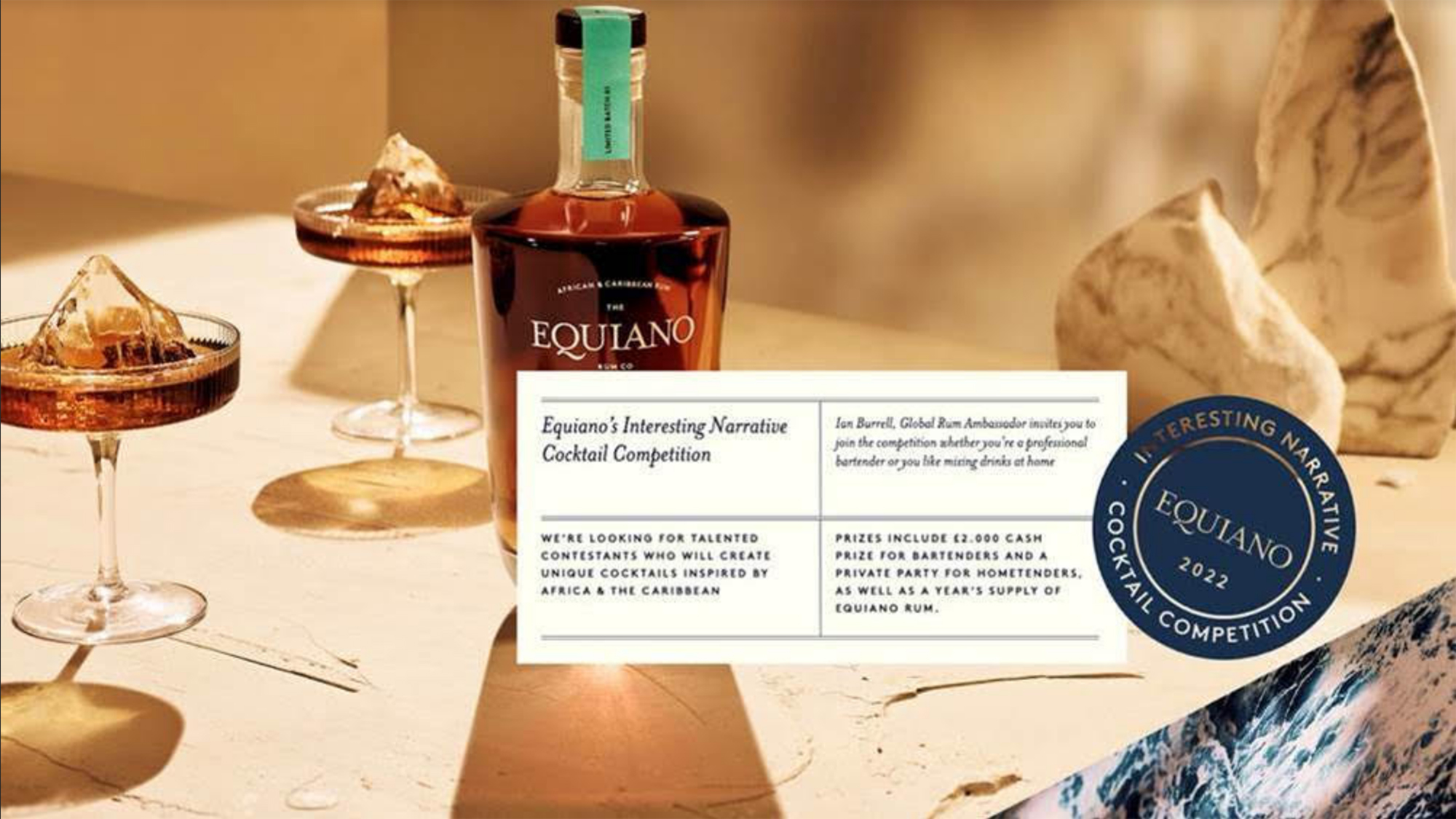 The Equiano Rum Co has launched The Interesting Narrative Cocktail Competition, inviting both professional bartenders and enthusiasts to create a unique drink inspired by Africa and/or the Caribbean, utilizing their multi-award-winning rums. Entries will be judged by an expert panel led by Equiano Co-Founder and Global Rum Ambassador Ian Burrell with prizes for all the finalists, including a £2,000 cash prize for the winner, a year’s supply of Equiano Rum, and the chance to be recognised amongst the global bar community and be featured in The Equiano Rum Co Cocktail Book set for international release in 2022.

Open to applications from both professionals (‘Bartender’) and enthusiasts (‘Hometender’) from around the world, the competition invites them to create a drink with either Equiano Original or Equiano Light that is inspired by Africa and/or the Caribbean – whether it’s in the name of the cocktail, the ingredients they use, the method in which they make it, the story behind their creation, who or what inspired them, or any mix of these elements. An image of the cocktail and details of its ‘Interesting Narrative’ should be submitted online where it will generate their very own cocktail recipe card.

The competition takes its name from the impactful story of the company’s inspiration and namesake – ‘The Interesting Narrative of the Life of Olaudah Equiano’, which follows the life of writer, entrepreneur, abolitionist and freedom fighter Olaudah Equiano, who was born in modern day South Nigeria in 1745 but who was sadly kidnapped aged 11 and enslaved. Tenacious and determined, Olaudah paved his way to liberation through selling rum. As a writer and speaker, Equiano became a prominent abolitionist, and his powerful memoir went on to inform the Slave Trade Act of 1807, impacting the freedom of people all over the world. His autobiography, first published in 1789 in London, was the first written account on the lived-experience of the horrific reality of enslavement and it was amongst the first books from an African-born writer to be published in the United Kingdom and in the United States.

‘Bartender’ Entrants will compete for the chance to become one of five finalists, whose cocktails will be published internationally in the Equiano Rum Cocktail Book alongside some of the greatest names in the industry.  They will also be in with a chance to compete for a number of cash prizes, including the £2,000 first place prize. The finalists will have the chance to present their cocktails to the esteemed judging panel including The Cocktail Lovers’ Sandrae Lawrence, Monica Berg of London’s acclaimed Tayēr + Elementary (#2 in this year’s 50 Best Bars), and owner of the esteemed Trailer Happiness Sly Augustin – at the live final in June 2022.

‘Hometender’ Entrants can show off some of those mixology skills that they’ve picked up during lockdown. In a bid to make the competition interesting and inclusive, The Equiano team wanted to recognise the talents of the many, rather than just the few. The winner of the Hometender category will secure a complimentary night out with all their friends at a world-class bar in their country, where their winning cocktail will be made for them throughout the evening. Entries for the ‘Hometender’ Competition will be judged by Ian Burrell alongside an amazing panel of spirits experts from both sides of the Atlantic. Further details to be announced.

Further Prizes: Bartenders and Hometenders who share their cocktail recipe card on social media tagging @equianorum will also be in with a chance to win a year’s supply of Equiano Rum delivered straight to their door.

“Over the years, I’ve judged my fair share of cocktail competitions and we wanted to put our own spin on it, encouraging everyone to be inspired by the life of Olaudah Equiano, as we have, and to draw on the wide-ranging influences of Africa and The Caribbean to create something special with Equiano Rums,” explained Burrell. “We recognise that it’s been a challenging few years for the international on-trade, so we decided early on that we would be offering cash prizes to the top five bartenders, with a whopping cheque for the overall winner.”

The competition is now open and it closes on April 30, 2022 at 00:00 GMT. Hometender Winners and Bartender Finalists will be announced in May 2022. The Bartenders Final will take place in London on the June 13, 2022, as well as being streamed online.

For more information and to submit entries, head over to the competition’s official website.