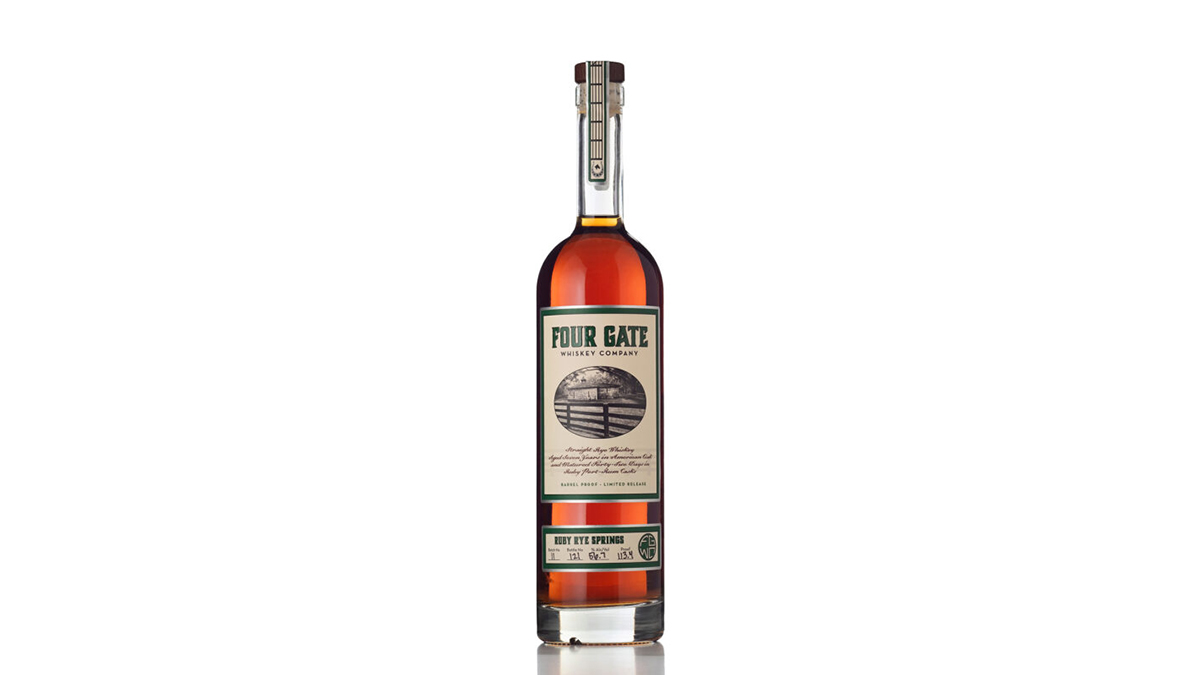 Four Gate has released its Ruby Rye Springs Whiskey. The new offering is the eleventh batch of Whiskey released by the Kentucky-based brand.

Four Gate Ruby Rye Springs takes seven-year-old Indiana straight Rye Whiskey and finishes it for 42 days in Ruby Port-Rum casks. This is the third release of this underlying Whiskey, coming after the River Kelvin Rye and the Split Salve by Kelvin.

The secondary casks originally were originally used to mature ruby port, a fortified wine from Portugal in which the wine is removed from barrels and stored in tanks to prevent further aging, leaving the resulting product sweeter and brighter on the palate than other styles of port wine. The barrels found a second use with Virago Spirits in Richmond, VA where the barrels were used to age a blend of rums, imparting them with a lush molasses sweetness that pairs excellently with the bright red fruit of the ruby port.

“The moment we found these barrels, we knew what we were doing with them,” said Chief Blending Officer Bill Straub, “They were crying out for rye whiskey, and I really think this is one of the best products we’ve bottled.”

“These barrels were off the charts,” commented Chief Barrel Officer Bob D’Antoni, who sourced the barrels in collaboration with Kelvin Cooperage. “This rye is so good. I know you’re going to love it.”

On the nose, Four Gate Ruby Rye Springs offers aromas of fruit cake, tart gum drops, lemon and orange zest, and spicy rye. On the palate, a sweet tart red berry note greets the tip of the tongue with a spicy black pepper flowing down the center palate. Raspberries and blueberries surround the periphery with a hint of citrus rounding out the taste. The finish is medium -to-long, the black pepper and sweet red fruits dominate the start, with sweet molasses rounding out the viscous mouthfeel.

Just 1,444 bottles of the Rye Whiskey were produced by the distillery. Coming in at 113.4 proof, they are priced at $185 per bottle in Kentucky, Tennessee, and Georgia. They can also be purchased online through Seelbachs.com and BourbonOutfitter.com.