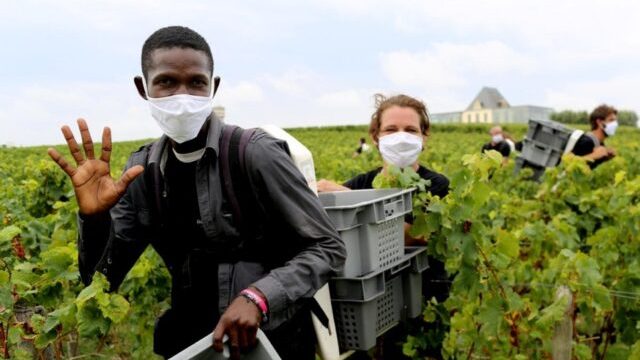 As reported by the United Nations’ Refugee Agency, Grand Cru Bordeaux estate Château Pédesclaux has recruited the help of refugees to help fill out the labor shortages brought about by the COVID-19 pandemic.

Pédesclaux has partnered with an association of former rugby professionals to offer training and seasonal jobs to refugees.

Ovale Citoyen uses rugby as a way of promoting team-building and inclusion. Its winery work project, which launched last year, is called ‘Drop in the Fields’.

“The employment potential in the vineyards is huge. Viticulture has a shortage of labour and this lack has been exponential since the Covid crisis began,”

During the 2020 harvest, which was a particularly hard time to recruit temporary staff due to the pandemic, the château hired 90 refugees to pick grapes.

Sudanese refugee Zakaria, who was granted refugee status in France in 2017, told the UN Refugee Agency after being taken on by the estate. “I have found a job, my children are in school. I feel safe here,”

Harvesting grapes during a pandemic has not been easy, but having the extra pairs of hands during the harvest has been vital for the château.

Speaking on the the situation Vincent Bache-Grabielsen, technical director of Pédesclaux, told the agency:

“There was a lot of uncertainty about our ability to have people among the vines. But the vines won’t wait for us. We follow the cycle of the seasons.

“What is great about Ovale Citoyen is the energy they put into making it happen,”

Ovale Citoyen was created by former rugby players from Union Bordeaux Bègles, and their incentive has proven so successful that not only were the temporary jobs filled, but a number of refugees went on to become trained in vineyard duties like tractor driving, with the view to being offered full-time employment at the estate.