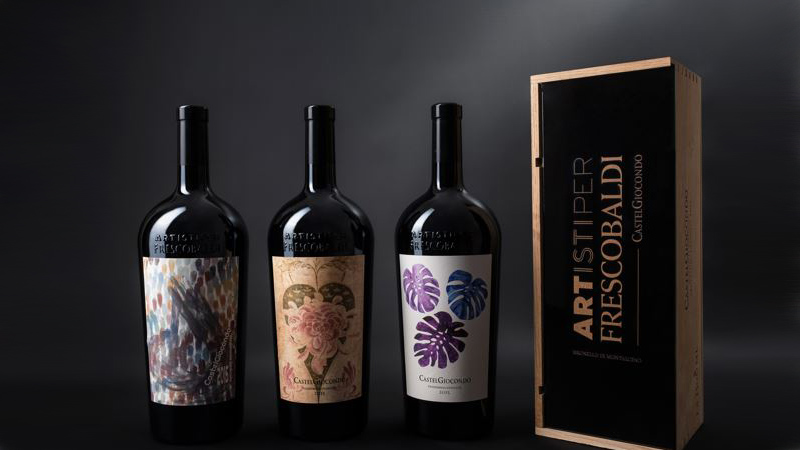 “The objective of the Artisti per Frescobaldi project is to commission from artists of the younger generations artworks inspired by the Frescobaldi family wine estates, and more in general, by the world and culture in Italy,” explained Ludovico Pratesi, Curator of Artisti per Frescobaldi. “The Artistic Director and the Curator select artists based on these criteria, nominating those who have succeeded as well over the years, utilising various media and expressive languages, in respecting the genius loci of particular areas, what Marc Augé refers to as anthropological places.”

The latest edition showcases work by Canadian artist Andrew Dadson, America’s Erica Mahinay and Italy’s Gian Maria Tosatti. Each artist submits a work of art inspired by the terroir of CastelGiocondo, which is exhibited in the spaces and cellars of the winery and is designed to “engage in an intriguing and deliberate dialogue with their surroundings”, the estate said. Each work is then released as a limited edition label on the estate’s Brunello di Montalcino CastelGiocondo.

The works are also judged by a panel of art experts, as part of the Premio di Arte Contemporanea (Contemporary Art Prize), with Gian Maria Tosatti’s work ‘Cattività’ taking the top prize.

“We are truly excited to at last announce the winner of this fifth edition and to unveil the works of the three competing artists,” Tiziana Frescobaldi, artistic director and president of the Compagnia de’ Frescobaldi said. “The works now grace our CastelGiocondo estate, joining the 12 others from the previous editions”

Now in its fifth edition, the project was started in 2013 but harks back to the long history of patronage by the Florentine Frescobaldi family, which dates back to the Renaissance. “That participation in the artistic world and support of artists remains today vitally important to the Frescobaldis,” said a spokesman. “That commitment was a shared hallmark of other ancient noble families as well, who from the Renaissance forward guided Italy’s artistic and cultural life, in Florence in particular, as patrons, commissioners of art, and collectors.”

For more information, head over to Frescobaldi’s official website.