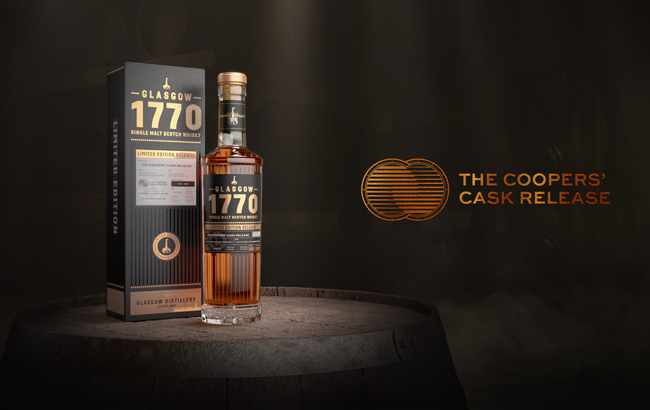 The new whisky was developed by Hugh McMurray, cooper at The Glasgow Distillery, and Kevin McLaughlin from US-based Kelvin Cooperage.

Speaking on the new drink, Liam Hughes, CEO and co-founder of The Glasgow Distillery, said:

“This unique hand-built cask, cask no 15/87, is the physical embodiment of the relationship that exists between cooperage and distillery and ultimately, the relationship between wood and spirit – the fundamental elements that come together to make great single malt Scotch.”

The resulting spirit is said to have ‘soft notes of honey, summer fruits and toffee, a harmonious marriage of complex sweetness with a long, rich and slightly spicy finish’.

The Glasgow Distillery will release just 403 individually numbered bottles of The Coopers’ Cask Release, which comes with a carton containing a booklet that tells the tale behind the collaboration.

Kelvin Cooperage can trace its origins back to Glasgow, where it was originally founded in 1963 by Ed McLaughlin, who repaired and rejuvenated casks for whisky distilleries across Scotland and Ireland. In the early 1990s, Ed McLaughlin moved the business to Louisville, Kentucky.

Offering his own take of the drink, Paul McLaughlin, owner of Kelvin Cooperage, said: “The Coopers’ Cask has been launched with the vision to bring our craftsmanship and expertise back to our home city of Glasgow in a way that is truly unique.

“This is Glasgow-distilled single malt, matured in a hand-built cask made by not just one, but two sets of Glasgow hands.

“It is, however, with a heavy heart that we announce that Kevin, my much loved brother, Kelvin Cooperage’s fearless leader and one of the cooper’s who made this collaboration possible, passed away in December 2019 before the launch of this release.

“The Coopers’ Cask Release is therefore launched in honour of Kevin, who was instrumental in bringing this project together and whose memory lives on within the spirit.”

Bottled at 53.3% ABV, the whisky is priced at £59 (US$82) per bottle and can be purchased from The Glasgow Distillery Company’s website.

In October, The Glasgow Distillery Company released its second peated single malt, the 1770 Peated Rich & Smoky Whisky. The offering has been finished in Pedro Ximénez casks.