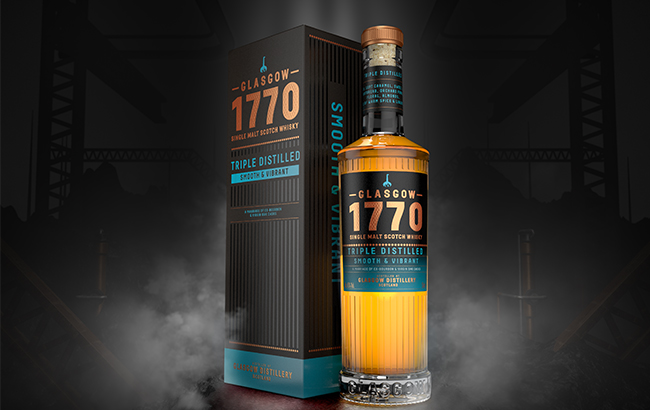 Following the incredible success of the original bottling, the Glasgow Distillery Company has shared a new iteration of its 1770 Single Malt Triple Distilled whisky.

The new edition is the third and final release in the distillery’s core range, which includes the 1770 Peated expression launched in 2019, and Glasgow 1770 Original, which debuted in 2018. The producer also unveiled a new edition of its peated bottling in October 2020.

Made with water from Loch Katrine, the new expression is similar to Triple Distilled Release No. 1.

After maturation, it is married and bottled to produce a ‘smooth’ and ‘vibrant’ whisky.

On the nose, the whisky offers notes of sweet vanilla and chocolate, combined with pears and peaches.

With a long, spiced finish, the 46% ABV expression is non-chill-filtered, and available to purchase for RRP £49 (US$68) from the Glasgow Distillery Website.

As mentioned above, in October, The Glasgow Distillery Company released its second peated single malt, the 1770 Peated Rich & Smoky Whisky. The offering has been finished in Pedro Ximénez casks. Made from malted barley that has been smoked with “aromatic heather-rich” peat from the Scottish Highlands, and water from Loch Katrine, the Glasgow 1770 Peated Rich & Smoky Whisky began life maturing in virgin oak, before being finished in the aforementioned Sherry casks.