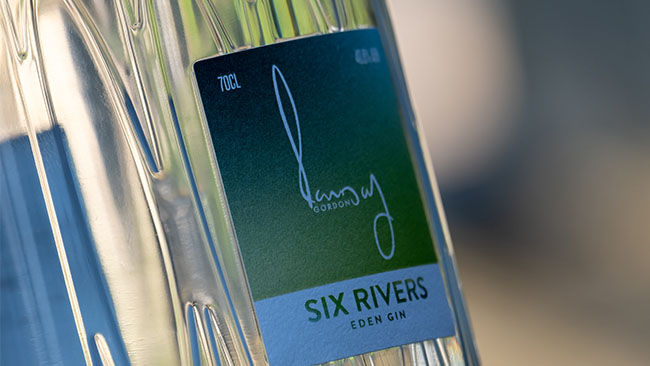 Gordon Ramsay has partnered with Eden Mill to unveil his first gin as part of a new range, Six River. The new spirit is said to be inspired by the “unique flavours of Fife” in Scotland.

The first release in the Gordon Rasmay Six Rivers gin series is Six Rivers: Eden Gin, which is named after the River Eden which flows past the Eden Mill distillery near St Andrews, Scotland.

“The team at Eden Mill have an innovative approach to the art of distilling, it has been a joy to work with them and I really respect their passion for their craft,” said Ramsay. “We set out to create a narrative from the area around the distillery, to forage ingredients and develop flavours that told a story.”

Six Rivers: Eden Gin is infused with botanicals including honeyberry – “a new Scottish superberry.” According to Eden Mill co-founder Paul Miller, it is “the first time the honeyberry has ever been used in a gin of this scale before.” It also includes mara seaweed harvested in Crail, Fife.

“I’m very proud of the range of products we’ve produced,” said Ramsey about the collaboration with Eden Mill. “With the beautiful native ingredients and stunning bottles I can’t wait for everyone to have a drink on me.”

Miller said: “It has been an honour to work closely with Gordon to create the Six Rivers collection. His knowledge and understanding of flavour is incomparable, and it has been a real joy bringing our teams together to create a collection of drinks so reflective and personal to his character, tastes and passions.

“We are particularly proud to work with the ingredients from the landscape of our home. The larder of Fife is one of edible gold, and we’re delighted to be supporting an ecosystem of small independent producers within 15 miles of our climate positive distillery to gather outstanding ingredients.”

For more information, head over to Eden Mill’s official website.

In March, Ramsay launched his own brand of Calfornia Wines, and in December of last year, he debuted a range of hard seltzers, Hell’s Seltzer.