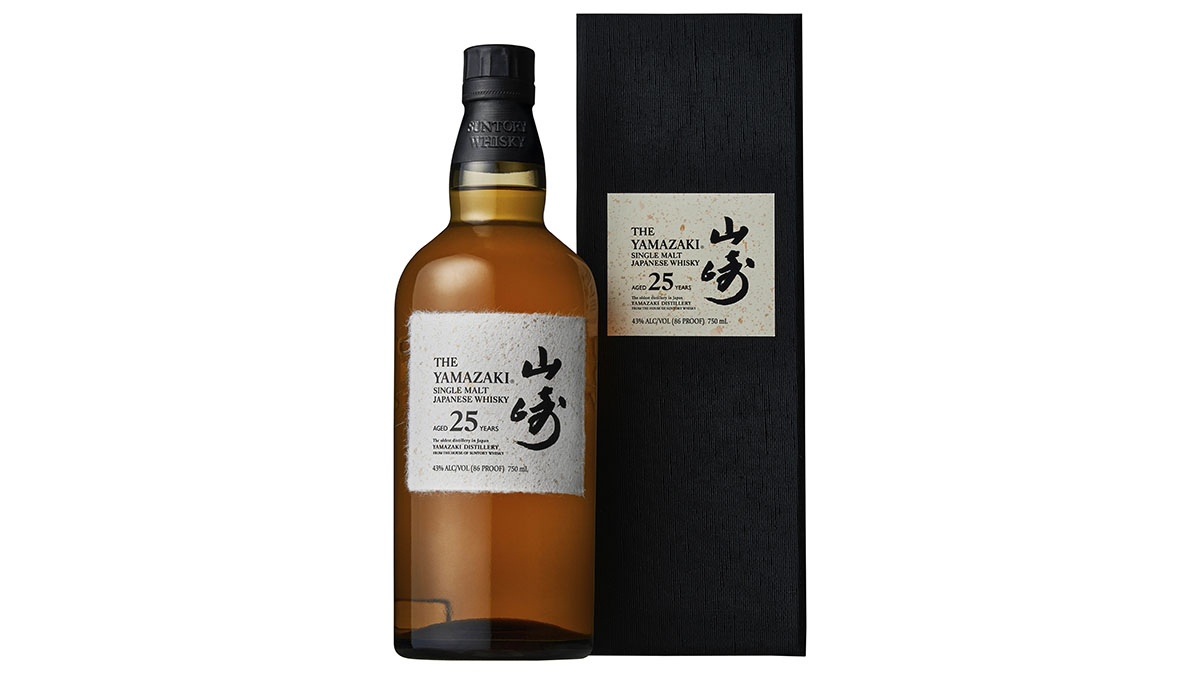 The House of Suntory has introduced a reformulated Yamazaki 25. With the new offering, the Japanese spirits giants “honor the birthplace of Japanese whisky, capturing and celebrating the pioneering roots of one of the world’s greatest whiskies,” says a press release.

Yamazaki 25 Single Malt Whisky is blended from rare whiskies aged over a quarter of a century in the place Shinjiro Torii chose to begin the illustrious journey of Japanese whisky. For this release, Fifth generation Chief Blender Shinji Fukuyo has returned to the roots of what made Yamazaki quintessentially Yamazaki. Yamazaki Single Malt celebrates the profound spirit of its soul place – deep, complex and multi-layered with fruit and Mizunara notes. For Fukuyo, Yamazaki 25 was a journey in rediscovering what is Yamazaki, the pioneer of Japanese Whisky. Now, Yamazaki 12, Yamazaki 18 and the reformulated Yamazaki 25 all contain carefully blended liquid components aged in American oak, Spanish oak, and Japanese Mizunara oak.

“My inspiration for Yamazaki 25 was the Yamazaki 1984 statement that was awarded the ultimate recognition of the Supreme Champion Spirit at the International Spirits Challenge in 2010,” said Fukuyo. “We went back to the key component whiskies of Yamazaki. We deliberately chose to feature the depth and profound nature of the notable Japanese Mizunara Oak. For in its meticulous balance with the American and Spanish Oak, Yamazaki’s signature multi-layered taste profile and complex aroma is accentuated.”

Yamazaki means “mountain cape” originating from the two Japanese characters⼭(yama – mountain) and崎 (saki – cape), referencing its unique geographic location – surrounded by a range of forest covered mountains. Since 1923, Yamazaki Distillery has been globally acclaimed as Japan’s first and oldest malt distillery. Nestled on the periphery of Kyoto, the area around Yamazaki Distillery has been long referred to as “Minaseno” famous for its natural water, even mentioned in the Man’yoshu, the ancient anthology of Japanese poetry. Home to Sen no Rikyu, Master of “The Way of Tea” and his renowned “Rikyu no Mizu” (water of the imperial villa), the waters of Yamazaki are selected by the nation’s Ministry of Environment as one of Japan’s one hundred best natural mineral waters.

In 1984, following the pioneering spirit of Shinjiro Torii, second generation Master Blender Keizo Saji introduced Yamazaki Single Malt Whisky to commemorate the 60 years since the first drop of whisky was made at the Yamazaki distillery. Since then, Yamazaki has continuously paved the way for Japanese whisky. In 2003, Yamazaki was the first Japanese whisky to be awarded the Gold Medal at the International Spirits Challenge. Today, Yamazaki is embraced as one of the best single malts of the world, with Yamazaki Sherry Cask 2013 being awarded the World’s Best Whisky in Jim Murray’s Whisky Bible 2015. This year, 18 years after receiving its first Gold Medal, the reformulated Yamazaki 25 again received a Gold Medal from the 2021 International Spirits Challenge.

Meticulously composed of rare malt whiskies, all aged over 25 years in American, Spanish and Mizunara Oak casks, this masterpiece single malt embraces a complex flavor profile highlighting dried-fruit aromas, balanced with hints of tart and subtle sweetness, all enveloped in its signature, noble, sandalwood bouquet of Mizunara casks, for a deep and lingering finish.

Fukuyo suggests Yamazaki 25 to be enjoyed neat in your favorite whisky glass to savor your special moments.

The bottle label is 100% handcrafted mulberry Echizen paper produced via a slow process of drying on wood boards (a traditional Japanese method).

For more information, head over to House of Suntory’s official website.

In January, after a four year hiatus, Suntory reintroduced Yamazaki Limited Edition for 2021. The announcement from the Japanese spirits giant came at the same time as it announced the release of Hibiki Blossom Harmony.

In August 2020, a bottle of Yamazaki 55 Year Old set the new world auction record for a bottle of Japanese Whisky. Already the oldest Japanese Whisky in history, the bottling commanded a price of $795,000 USD at Bonhams Fine & Rare Wine and Whisky Sale in Hong Kong.