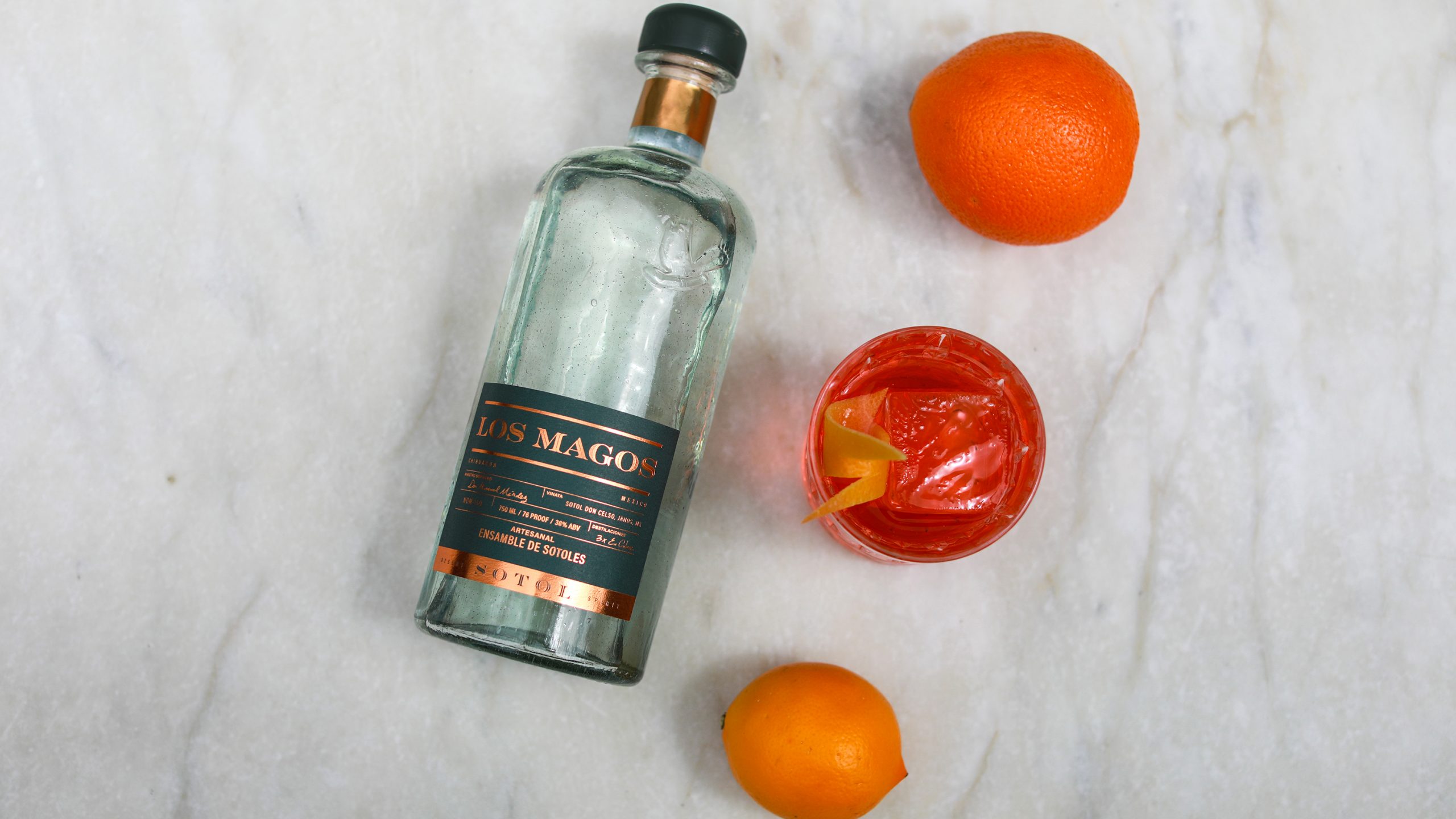 Known as the hidden gem of the Chihuahuan desert, Sotol has been enjoyed for centuries and is the state spirit of Chihuahua, Durango. and Coahuila, but it wasn’t until recently that the spirit’s popularity began to reach the United States. Still, much like mezcal a decade or so ago, the spirit remains mysterious, with few brands selling their products on this side of the border. Los Magos Sotol is looking to change all that by lifting the shroud on the Mexian asparagaceae spirit, bringing its rich, floral, and herbal flavors to the masses.

In this week’s Bottle Breakdown, we sat down with Co-Founder and Chief Production Officer Juan Pablo Carvajal to get a lesson in the history and production of Sotol, and learn what makes Los Magos such a unique offering.

Spirited Zine: Just to start, can you tell us a bit about the origins of Sotol and its history as a spirit?

Juan Pablo Carvajal: The sotol plant’s history stretches back to thousands of years when the indigenous people of Northern Mexico used it as a food source as well as used its leaves for baskets. It was during the Spanish colonial period (about 300 years ago) when the Spaniards introduced the distillation process, that the spirit of Sotol was born.

SZ: At this point, everyone knows Tequila and Mezcal has entered most of the drink world’s lexicon. What is unique about Sotol and how is it different from the two other spirits Mexico is currently known for?

JPC: This was an opportunity for us to show the world the richness of the land and the culture of a people – we wanted to create a spirit that encapsulated all that was treasured from the Chihuahuan desert. The concept that this spirit was always there and people have not been able to partake, enjoy, experience and taste this spirit was something that compelled us to share it with the world and take its rightful place among the rest of the most well-known Mexican spirits.

One of the more interesting facts about Sotol is that it’s a much more sustainable resource because of the regenerative properties of the plant. The agave plants typically die when they are harvested. Our sotol is also harvested from the wild while most agave plants are farmed.

Making sotol is work intensive and very slow. For one plant of sotol, you typically yield one bottle of sotol. So, there are a lot of other brands that are making sotol in modernized factories to meet the demand and that’s ok too but we have chosen to keep our artisanal process because that is core to our brand DNA.

Like Tequila, there are a lot of “Sotol” producers using the name but legally – the official Mexican appellation for Sotol only allows the name to be applied to Spirits made from sotol plants in the Chihuahuan desert (3 states of Chihuahua, Coahuila and Durango)

And finally, our flavor profile is the best there is, bar none.

SZ: As a brand, how does Los Magos go about teaching people about sotol and do you find it challenging to get people to think about it separately from mezcal and tequila?

JPC: We feel like we are still in the early stages of educating consumers about Sotol.  Sotol is an experience unlike other spirits, and should be recognized for its flavor profile, cultural experience, and rich history. We hope that sharing our culture and the beautiful people that make our spirit possible, along with giving back and uplifting our communities will be part of a journey that Sotol enthusiasts will want to partake in and understand.

Los Magos is a premium brand made with the highest quality and with a proprietary triple distilled formula that should be a part of every bar that carries premium spirits from around the world. Once people discover the brand, we hope they look deeper into who we are and how we do what we do. We feel the more people taste our sotol, the more ability we have to educate people about this time honored drink.

SZ: Can you take us through the process of making Sotol, from plant to fermentation to distillation and aging?

JPC: The first step towards making sotol is collecting the plant. Sotol plant grows wild in the arid ranches of Chihuahua. Each plant is selected by the “tumbadores” (people who harvest sotol) to be harvested because of its size and apparent maturity. It is cut down first with a metal bar that is flattened on one side, allowing the tumbador to hit the plant at an angle and, aiming to hit its central core, break off the heart of the plant from the meristem and its root system. It takes two or three hits to make this happen. The leaves are then removed with an axe and the heart of the plant, or the piña, is exposed.  Once collected the plant is transported to the distillery or “vinata” where it is processed.

The first step in the distillation process is cooking the plant. It is cooked in an underground cooking hole, lined with volcanic rock, that is heated with oak, poplar and mezquite firewood. Once hot, the cooking hole is filled with piñas, around 3 tons of them, and covered with palm leaves, fabric and dirt to properly bury it underground, leaving a small opening that is used to add water to the cooking process, allowing for vaporization in the cooking process. After 3 days the piñas are fully cooked.

Milling the piñas is a two step process. First the piña is cut in half by hand with an axe and the central core, a woody element that brings forth bitter taste, is removed. The remains of the piña are then milled in a mechanical mill.

Once the fermentation is done, fibers and liquids will be scooped out of the vat to be placed in copper stills. For the first distillation the 350lt sills are heated with firewood. The first distillation outcome is called “vino” and is a low ABV wine that is then distilled a second time. The second distillation takes place in copper stills heated by gas and the heads, hearts and tails of the spirit are separated. For Los Magos proprietary recipe the spirit is distilled a third time, allowing for a smoother and fully flavorful sotol.

Once distillation is done, the mixture of heads, hearts and tails is done to produce a 100% sotol spirit. No water is added to balance the alcohol content, this is done with the tails of the distillation process.

Bottling takes place within days of distillation. Filling of bottles is done via a bottling machine and labeling and waxing of the caps is done by hand.

SZ: Los Magos partnered with Jaquez Family Distillery to create its proprietary recipe. How did the relationship begin and what makes Don Celso the ideal man for the job?

JPC: We are working with a distillery with a tradition of six generations of sotoleros or sotol makers that have refined their techniques by producing in different environments, at different times of the year and with a variety of sotol plants from different terroirs in the Chihuahuan Desert. Their command on the mastery of their craft has allowed us to focus purely on the quality and flavor profile of Los Magos Sotol with our Master Distiller, Don Manuel Mendez. It took several years to perfect our recipe but we know exactly what flavors and aromas to accentuate and which ones to leave out. We produce in an artisanal way, pit roasting, open fermentation and copper still distillation, and have developed our proprietary recipe through an awareness of the subtleties of the process and tweaking them to our advantage.

SZ: When we taste sotol, what kind of flavors should we be looking for?

Bright, slightly floral, and fresh with an undertone of herbal woodiness. Soft and smooth on the palate with hints of honey and savory spices make for a warm yet sweet finish reminiscent of summer rain and balmy mornings.

SZ: How should we enjoy Los Magos Sotol and is there anything we should pair with it?

Sotol’s versatility is one of our favorite aspects, you can enjoy it neat, with a cube of ice or in a cocktail.  We have a recipe book we can share with you which is also available on our website!

SZ: Can you tell us a bit about Los Magos’ approach to sustainability and why it is so important to the brand?

JPC: Sustainability is one of our core brand pillars, because we see our future intertwined with preservation. Without harvesting and producing in a sustainable way, we risk the future of our industry and put in jeopardy an ecosystem that has thrived for thousands of years.

Water harvesting is a method that works the land in order to retain more water. Digging grooves into the land thus creating a series of dams that prevent erosion and promote water retention allowing for moisture to stay on the ground.

Fire prevention: Land work that removes a certain amount of dry bush that prevents rapid propagation of fires in the field.

The method of cutting plants by leaving the root system and lower plant intact allows for regeneration.

We collect seed and process it so that we are able to redistribute back into the lands.

SZ: What’s next for Los Magos? Are there any new spirits or styles coming down the line that we should be looking forward to?

JPC: We are so excited about what we have in our pipeline, we have amazing aged products that will come to market in the next 18 months that are so incredibly unique and rare that I think people are going to blow their minds when they taste it.

Los Magos is continuously experimenting with other uniquely aged products as well as barrel exchange programs. We are currently working with Whistle Pig to release an aged Sotol Product in their 12yr Rye Whiskey Barrels. In turn they will release a Whiskey aged in Los Magos Sotol

Come back to talk to us soon!