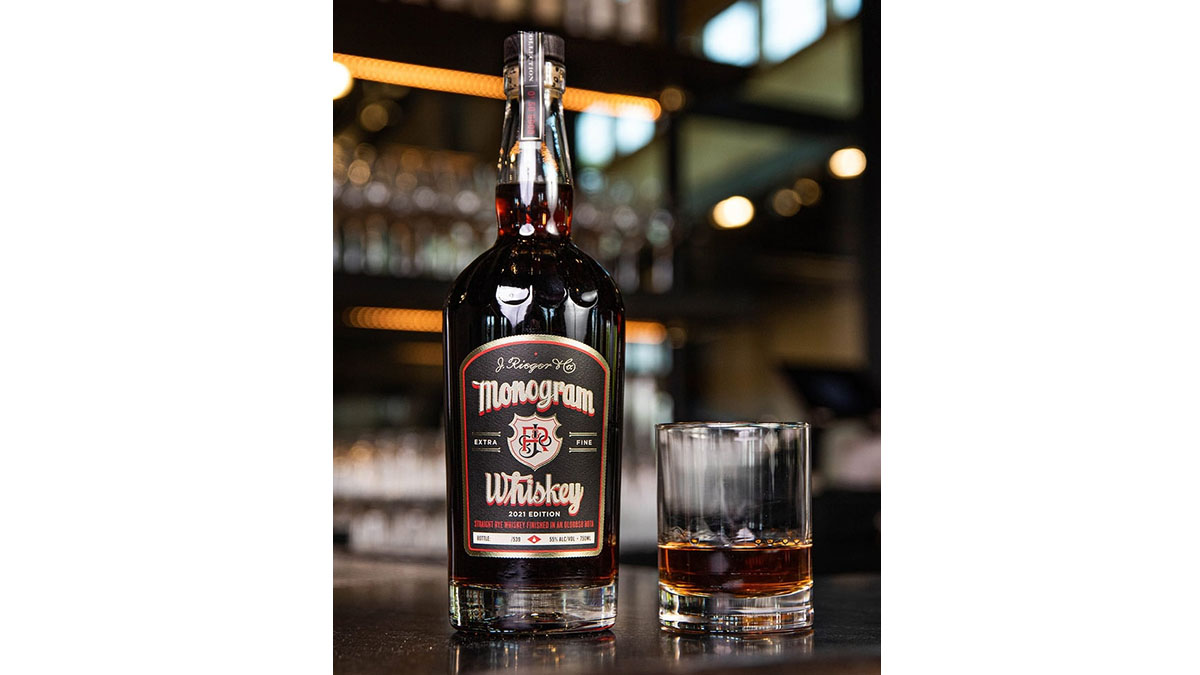 Rieger’s Monogram 2021 expression is a stark departure from the 2017, 2018, and 2020 expressions, drawing from a single century old cask (Bota #4) originally gifted to the distillery by Williams & Humbert, one of the oldest producers of Sherry in Jerez, Spain. Previously Rieger’s Monogram Whiskey was a blend of the four Botas that have been housed in its warehouse since 2016.

“The 2021 Monogram Whiskey release represents a turning point in the last 7 years of our journey to revive this beloved pre-Prohibition brand,” says Co-Founder of J. Rieger & Co Ryan Maybee. The Monogram bottling has always meant something special to J. Rieger & Co., but this release may be far and away the most special thing we have ever done.”

Rieger’s 2021 Monogram Whiskey consists of a blend of Straight Rye Whiskeys that were between 5 & 10 years old when they entered the Monogram Solera in 2015. For the past 6 years, the Straight Rye was exclusively finished in one cask, Bota #4. That single 500-liter century old Sherry cask was once part of the legendary Williams and Humbert Solera Especial. Traditional solera utilizes a system of fractional blending made famous in Jerez, Spain. The process of replenishing the casks, commonly referred to as Solera, adds complexity and character over time. In the 3 previous releases of Monogram Whiskey – 2017, 2018, and 2020, Cask #4 provided a tiny part of the blend due to it’s profoundly unique character and bold flavors. In a unique departure from our previous releases, the 2021 Monogram Whiskey release consists of only this single cask, and its bold, intense, flavors.

Since the Monogram Whiskey label was revived, all releases have been created in collaboration between the distillery team in Kansas City and Sherry expert Steve Olson.

Both the 2017 and 2018 editions of the Rieger’s Monogram were named in the top ten Global Best New Spirit in the Tales of the Cocktail Foundation Spirited Awards. This extremely limited release (539 bottles) combines elements of rich deep fruit with the characteristic nuttiness of Oloroso Sherry and spices. This year’s tasting notes highlight the evolution of Rieger’s 2021 Monogram Whiskey Oloroso Bota as a standout.

The opening aroma is reminiscent of spring flowers, and is bright, green and fresh. There are also fruity notes of tamarind, papaya and cola. On the first entry to the palate, charred honeycomb meets ash and char, molasses, tar, toasted marshmallow and deep, dried, dark fruits like prune and raisin. The sweet and savory flavors mingle with spicy tobacco, which leads to decadent butter pecan ice cream. The texture is creamy and elegant.

Only 539 bottles of Rieger’s Monogram Whiskey 2021 Oloroso Bota will be made available at liquor retailers and restaurants across the Kansas City metro area. A select allocation will be available in New York and a few other select markets. It will be priced $139.99 and is bottled at 110 proof (55% ABV).