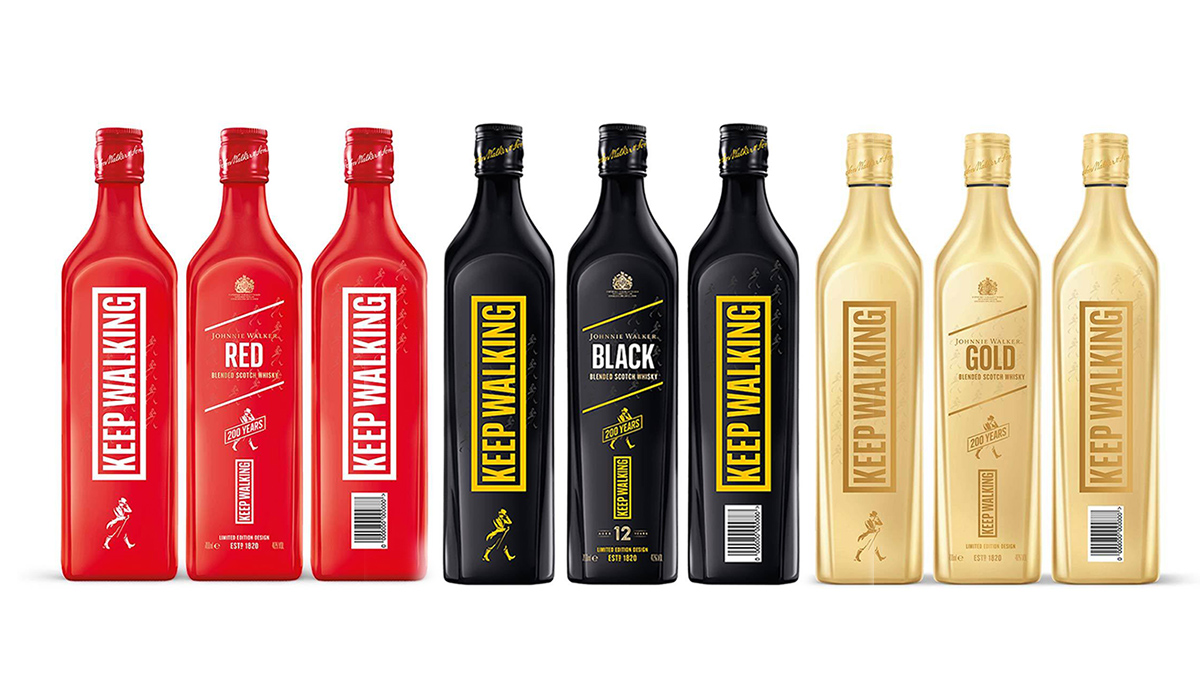 Johnnie Walker has created three limited edition bottles for its Red Label, Black Label, and Gold Label Reserve Whiskies to celebrate the Diageo-owned brand’s 200th anniversary. On the usual bottles, a slanted label features the blended Scotch’s name/color, but that has been updated to an opaque wrap that covers the entire bottle. Don’t worry, the Whisky inside the bottles remains the same.

“These limited edition bottles give a bold new look to our most iconic whiskies and perfectly celebrate Johnnie Walker’s depth of character as we celebrate this incredible 200-year milestone,” said Ali Reynolds, Johnnie Walker GB brand ambassador “This striking new design is sure to stand out on shelf and appeal to both enthusiasts and those who are new to the Scotch scene. The new bottles also make an ideal option for gifting occasions as we showcase the innovative brand ethos and open the doors to a new generation of whisky drinkers.”

The 200th anniversary celebrates the year, 1820, when John Walker bought an Italian warehouse, grocery, and wine and spirits shop on the High Street in Kilmarnock, Ayrshire, Scotland.

All three bottles are now available for purchase now from major retailers and can also be purchased directly from shop.malts.com.

It’s been a big year of releases for Johnnie Walker as it celebrates its 200th Anniversary. Back in July, the blended Scotch brand unveiled three limited edition Whiskies: Blue Label Legendary Eight, Celebratory Blend, and Bicentenary Blend as well as a limited edition bottle design. Each anniversary release celebrates part of the famed brand’s two century journey. All four releases are expected to hit shelves across the globe in October.

Early next year, a plastic free Johnnie Walker bottle will hit the market. It’s the world’s first ever 100% plastic free, paper-based spirits bottle, made entirely from sustainably sourced wood. Diageo made the move to improve its carbon footprint and to tackle plastic waste.