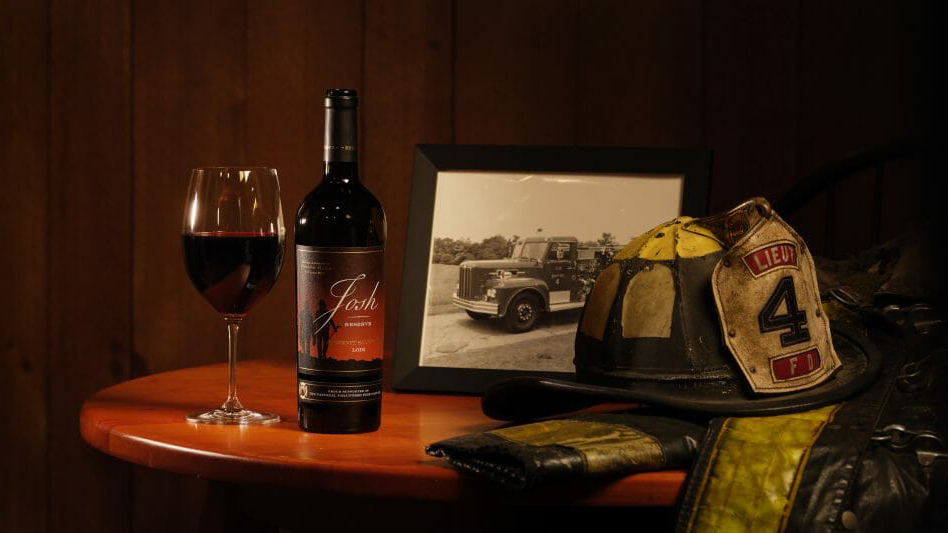 Josh Cellars has announced the launch of the brand’s third edition wine to benefit charity. This year’s offering is the 2019 Josh Cellars Reserve Lodi Cabernet Sauvignon and a portion of the proceeds from the release will benefit firefighter charitable organizations nationwide. The firefire community is one close to the brand’s heart as Josh Cellars founder Joseph Carr created the wine as a tribute to his father Josh, a volunteer firefighter in Berlin, NY.

For every bottle of Josh Cellars Reserve Lodi Cabernet Sauvignon sold, $1 will be donated to the National Volunteer Firefighter Council (NVFC) or other local firefighter charities including CalFire Benevolent Foundation, Boston Fire Department Relief Fund, the FDNY Foundation and the Professional Firefighters Association of South Florida. In all, Josh Cellars is committing more than $250,000 in donations to benefit thousands of firefighters across the country.

“Growing up, our home was across the street from the firehouse and my dad Josh was a volunteer firefighter,” explained Joseph Carr, founder of Josh Cellars. “I learned from a very young age that firefighters are true heroes, and I’m honored to be able to make such a significant donation to these heroes, recognizing not only their service, but also their selflessness.”

A brand rooted in gratitude, Josh Cellars was created by Joseph Carr as a tribute to his dad, Josh. To honor his dad’s legacy, Joseph Carr and the Josh Cellars brand consistently support causes and communities that were important to Josh Carr – from military and veteran organizations, to out of work restaurant workers and healthcare providers. Over the past three years, Josh Cellars has donated over $780,000 to charity groups across the country, through direct donations and proceeds from the annual release of the Josh Cellars Reserve Lodi Cabernet Sauvignon. This year’s donation to firefighter organizations will bring the brand’s total charitable contributions from the time of its founding to over $1 million.

“The National Volunteer Fire Council relies on donations from individuals and companies like Josh Cellars to help us provide support and resources for the volunteer firefighters who serve their communities every day,” said NVFC Chair Steve Hirsch. “We thank Josh Cellars for their continued commitment to those who answer the call and risk everything to protect their communities.”

In addition to the donations from this year’s limited-edition wine, Josh Cellars will also express thanks at select firehouses by hosting lunches alongside chefs Barbara Lynch in Boston and JJ Johnson in New York.

Sourced from vineyards in California’s Lodi region, Josh Cellars Reserve Lodi Cabernet Sauvignon is priced at $19.99. It offers flavors of blueberry and blackberry, layered with notes of espresso and toasted vanilla. It is recommended paired with summer grilling favorites, such as brisket with sweet barbecue sauces or rubs, and sides like potato salad with bacon.

Josh Cellars Reserve Lodi Cabernet Sauvignon is available at retailers nationwide. Head over to the brand’s store locator to find this wine near you.