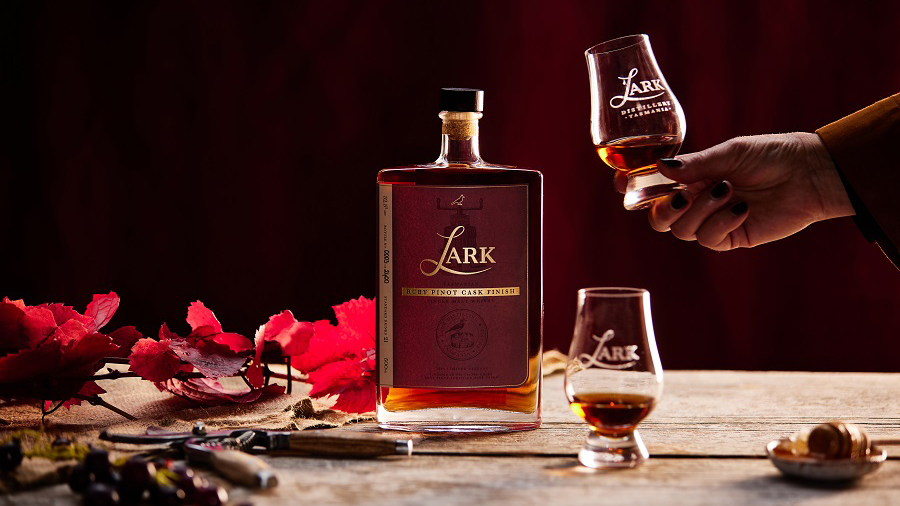 Lark Distillery has teamed up with Frogmore Creek Winery for a limited edition Ruby Pinot Cask Finish whisky. The new offering from the two Tasmania-based brands was released last month.

The Lark Ruby Pinot Cask Finish whisky used a combination of Port, Sherry, Bourbon, White Oak and Wine casks from its Bothwell Distillery to complement the juicy flavors of berries from the winery’s ex-Ruby Pinot Noir fortified wine casks that were used for finishing.

Bottled at 52.5% ABV, the Australian whisky’s nose is described as “a deep and cleansing breath of crisp spring air,” and features aromas of  raspberry, jasmine, honeysuckle, and frangipani. The palate delivers mandarin, maple, meadow honey, macadamia, and marzipan. The finished is described as featuring, “bright and juicy notes of black cherry, orange blossom, and toasted oak, topped with vanilla bean whipped cream.”

This is the third time Lark and Frogmore Creek have come together. Previously, Frogmore Creek used a Lark cask to mature a Christmas mine fruit pie jus which was used for Lark’s Christmas Cask. The second was a Sparkling Wine Finish exclusively created for The Whisky Club.

In March, Lark Distillery announced the latest addition to its Rare Cask Series, PARA100. The new offering from the Tasmania-based brand follows the launch of PARA50, which hit shelves back in November.
In December, Lark launched a dark and fruity limited release from its Coal Valley Distillery, the Double Tawny 2020. The new whisky is said to “elevate it’s signature Classic Cask single malt whisky to sensational new heights.”