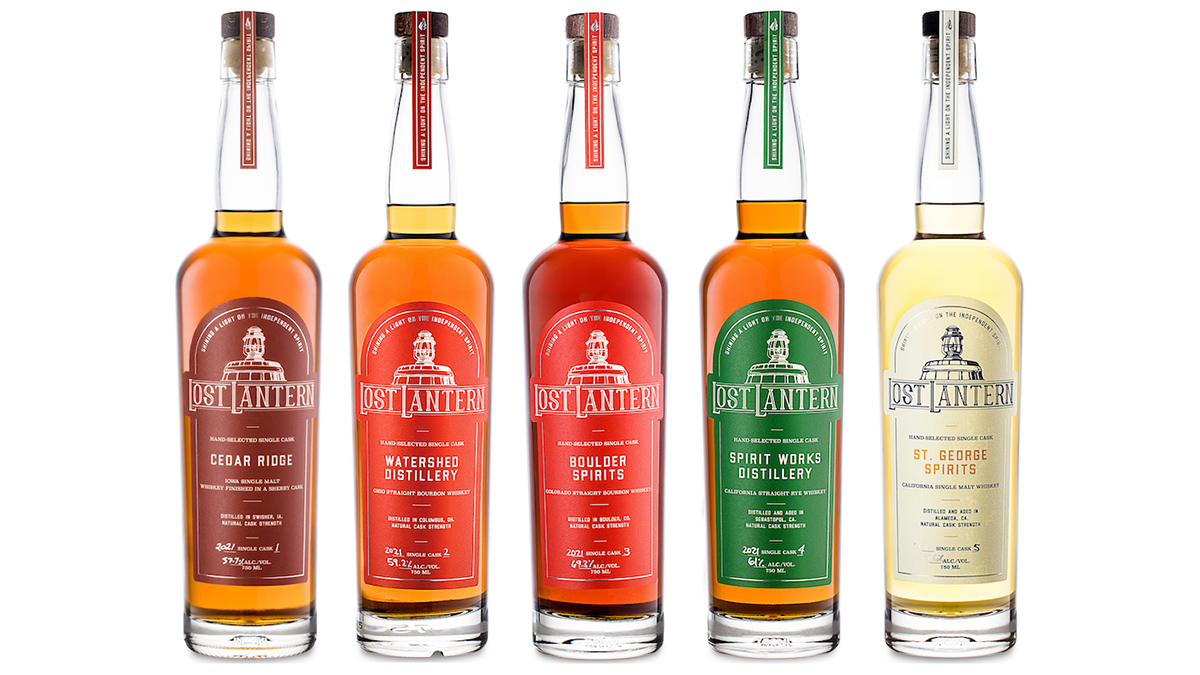 Since their debut last October, Lost Lantern has released ten single casks from around the country featuring some of America’s most exciting distilleries: Santa Fe Spirits (NM), Cedar Ridge (IA), New York Distilling Company (NY), Ironroot Republic (TX), Whiskey Del Bac (AZ) and Balcones (TX). Every single cask released thus far has sold out and since been retired – some within days of going on sale.

With the introduction of their third cohort, four new distilleries join the roster, extending Lost Lantern’s single cask collection into a number of new geographical locations. Beginning October 15, the Fall 2021 single cask collection will be offered for presale via Lost Lantern’s official website. These casks will also be available at a later point via Seelbachs.com. All offerings are bottled at cask strength, are non-chill-filtered, and have natural color.

“Lost Lantern’s Fall 2021 Single Cask Collection includes some of our very favorite casks we’ve come across so far. It includes whiskies from long-established, well-known distilleries like St. George Spirits and Cedar Ridge, as well as whiskies from highly regarded distilleries like Watershed, Boulder, and Spirit Works that have devoted followings, but aren’t distributed as widely,” says Lost Lantern co-founder Nora Ganley-Roper. “We’re especially excited to be releasing our first whiskey from Colorado and our first two whiskies from California, both major hotspots of craft distilling in the U.S.”

“Some of our casks push the boundaries of a particular style, like Single Cask #3, our high-malt bourbon from Boulder Spirits, or Single Cask #2, a five-grain bourbon from Watershed in Ohio,” adds Lost Lantern co-founder Adam Polonski. “Others are more traditional in style but come from places you wouldn’t expect. Single Cask #1, a Sherry-finished Single Malt from Cedar Ridge in Iowa, is exactly like that: even though the Great Plains aren’t well known for single malt (yet!), this cask will delight lovers of sherry and sherried whiskies. We truly believe this collection not only shows our range but the range of American whiskey, and it will provide something new and exciting for even the most educated whiskey drinker!”

Lost Lantern’s first sherried American single malt cask comes from the family-owned Cedar Ridge distillery in Swisher, Iowa. This particular cask had long been a favorite of the Cedar Ridge distillation team, until Nora and Adam spirited it away to be bottled. Aged for 2 years in 53-gallon new American oak, it was then finished for an additional 2 years in a 500-liter Sherry butt imported from Jerez, Spain. This is a classic sherried single malt, with rich, golden fruit flavors on top of a clean, honeyed malt base.

Founded in 2010, Watershed is one of the most sought-after and beloved distilleries in the Midwest.  Meticulous production methods, commitment to local ingredients, and innovations with grain have resulted in an impressive range of spirits and a devoted following statewide. Their whiskies are rarely found outside of Ohio, especially at cask strength. Aged for 5 years in a 53-gallon new American oak barrel, this straight bourbon whiskey has a unique five-grain mashbill that includes corn, rye, spelt, malted barley, and wheat. This cask has a rich sweetness, perfectly balanced by oak spice and an orangey zing, evoking the flavors of our favorite breakfast pastries.

The distillery was founded by Scotsman Alastair Brogan, who brought Scottish whisky-making traditions to the Colorado Rockies, where the dry, high-elevation environment makes for bold and unique spirits. Boulder uses a traditional Forsyths Scottish still and much of its output is Colorado single malt. Consequently, the straight bourbon whiskey from Boulder offers something unique—a very unusual high-malt mashbill: 51% corn, 44% malted barley, and 5% rye. The result, after 5 years of aging in a 53-gallon new American oak cask at over a mile in elevation, is a very big, rich, juicy straight bourbon whiskey. Hearty oak surrounds chocolate mousse, maple syrup-drenched waffles, fudge, and toffee. With a natural cask strength of 69.25%, this is a bourbon for people who love big bourbon, with a flavor profile that could only come from the mountains.

Located in Sebastopol, California, in the heart of Sonoma wine country, Spirit Works is a family-run distillery that was built from the ground up with sustainable practices in mind. Highly awarded and respected, the distillery also has one of the very few female-led distilling teams in the United States. Most importantly, they make wonderful spirits, especially whiskey. This single cask is a 5-year-old straight rye whiskey. It was aged in a 53-gallon new American oak cask and was made from a mashbill of 70% organic rye, 10% malted rye, and 20% malted barley. This straight rye whiskey has rich oak and baking spice flavors and deep chocolate notes, with hints of vanilla and lemon curd. Fresh, spicy, and balanced.

Founded in 1982 and located in Alameda, California, St. George is the country’s first craft distillery and has won renown for its commitment to experimentation, innovation, quality and precision, fresh and flavorful local ingredients, and above all else to trying new things. When they released their first single malt whiskey in 2000, the boom in single malt hadn’t started yet. They were blazing a new trail. More than twenty years later, they still do. While Fall 2021 Single Cask #5 is a single malt whiskey, it is bottled under Lost Lantern’s cream label, designated for “Other Whiskies.” Truly one-of-a-kind, this single malt is distilled from beer and has a very distinct and unusual flavor profile. Aged for 3 years in a 228-liter cask with a medium toast and toasted heads, this whiskey is very fresh and grassy and brings forth the idea of enjoying crème brûlée in a high alpine meadow.