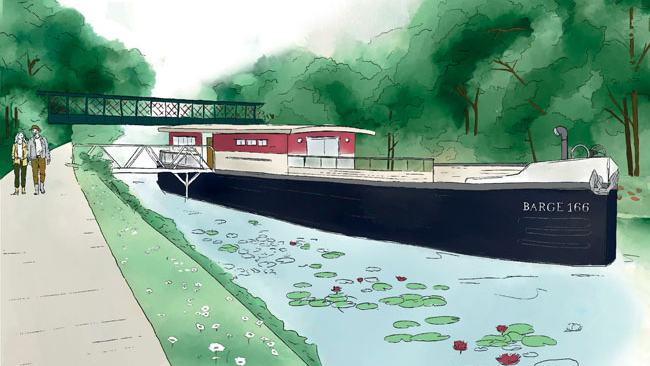 Maison Ferrand has announced it will create the “world’s first” floating cellar. The goal for the Cognac house, which also owns Plantation Rum, is to explore the impact of ageing spirits on water.

To create the cellar, Maison Ferrand acquired a 1948 Freycinet Barge, which it will equipped to house 1,500 30-litre barrels. Barge 166 will be anchored on the river Seine at Issy-les-Moulineaux, France and is set to debut in spring 2021. It will be used to inspect the impact of dynamic ageing on casks of Maison Ferrand Cognac and Plantation Rum.

Dynamic ageing is the process of ageing spirits at sea, where they are subject to continuous movement as a result of being stored on water. The process has been used since casks of Caribbean rum were transported by sea to reach cellars in Europe in the 18th century. Recently Camus released its Caribbean Expedition Cognac, which also investigated the impacts of dynamic aging on Cognac as it travelled from France to Barbados.

Swedish whisky maker Mackmyra has also been invited to age some of its casks on the barge.

Maison Ferrand will offer the public the opportunity to acquire casks stored in the floating cellar, and owners will be given the opportunity to select a type of barrel they wish to age and will be able to visit the barge to follow the progress of their spirit.

Back in June, Maison Ferrand anointed it will rename its Plantation Rum in an effort to support racial equality. Founder Alexandre Gabriel originally dubbed the brand “Plantation Rum” because of the word meaning, “a large farm.” He grew up on a farm and founded Cognac producer Maison Ferrand in 1989. In light of George Floyd’s murder at the hands of police and the protests that have come in its wake, the company has decided it’s time for an “evolution” of the brand’s name, which has obvious links to slavery.