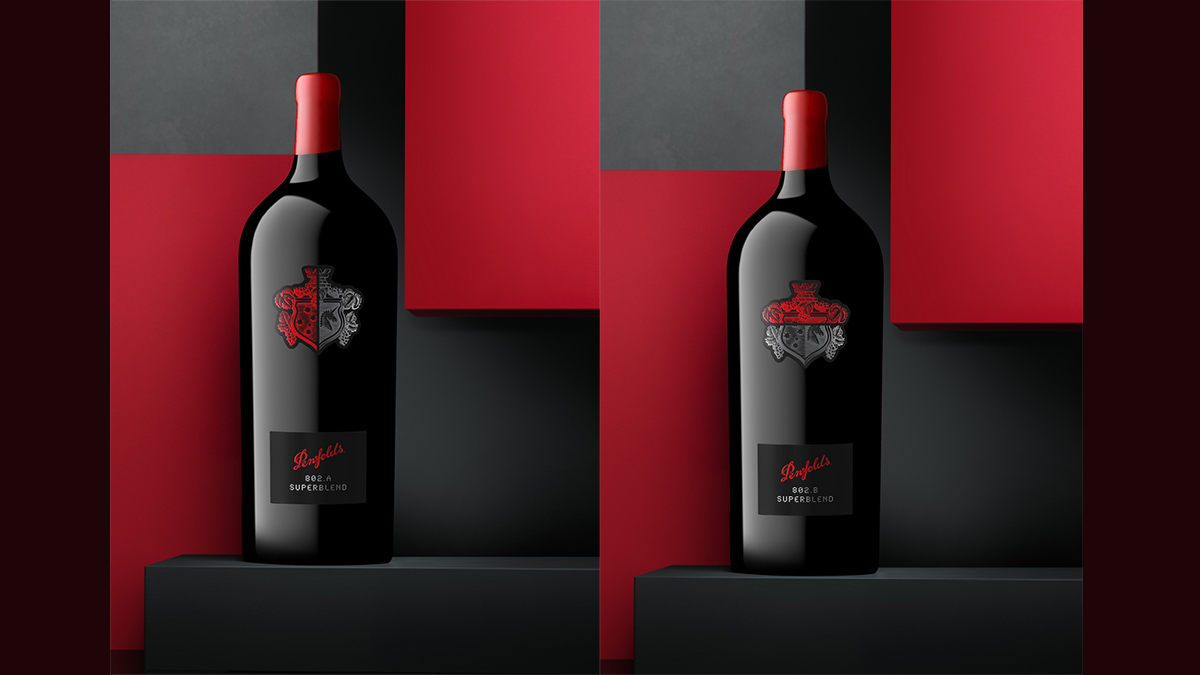 Penfolds are teaming up with BlockBar again, this time to release a rare 2018 Superblend duo of wines. In December, the Australian luxury wine giants became the first wine brand to partner with leading NFT marketplace when they launched a limited edition NFT tied to its rare Magill Cellar 3 barrel of wine.

The Superblend 802.A and Superblend 802.B Cabernet Shiraz 2018 Imperial Duo will be sold as two NFTs to one buyer. Each NFT is tied to a 6-liter bottle. Made from carefully selected parcels of fruit from the Barossa Valley, McLaren Vale and Coonawarra regions, one bottle is from the ‘802.A’ parcel, the other from ‘802.B’.

Imperial formats are typically reserved for Penfolds’ museum and the brand’s Superblend Imperial wines are not available for public purchase in retail. The two 6-liter bottles of Penfolds Superblend will be auctioned as one drop during a three-day event starting April 11 with a starting bid of approximately $25,000 USD (approx. 7.6 ETH).

The 802.A components were aged separately in new American oak hogsheads for 22 months prior to being blended. Cabernet sauvignon makes up 68% of the blend, while the shiraz accounts for the remaining 32%.

The 802.B varietal composition is close to evenly split with cabernet sauvignon contributing 55% and shiraz 45% of the blend respectively. The components were blended post vintage, completing 19 months maturation in French oak hogsheads. It is noted that “this wine will reward careful cellaring for several decades. An intriguing counterpoint to its American oak sibling.”

The NFTs serve as digital receipts that verify the buyer’s ownership and authenticity of the two Imperial bottles, which will be stored at BlockBar’s facility in Singapore until the buyer decides to redeem the NFTs by collecting the physical bottles.

As part of the NFT offer, the buyer will also receive a complimentary 750ml bottle of each of the Penfolds Superblend 802.A Cabernet Shiraz 2018, and the 802.B Cabernet Shiraz 2018 to taste in a private virtual session with Penfolds’ chief winemaker Peter Gago.

If the auction winner is a previous Penfolds NFT owner (via BlockBar.com) they will also receive a complimentary luxury Superblend 802.A and 802.B decanter.

“The release of these special Superblend NFTs follows two highly successful Penfolds x BlockBar NFT drops,” said  said Kristy Keyte, Penfolds’ chief marketing officer. “The response to date has been overwhelmingly positive. Penfolds first NFT linked to a barrel of 2021 Magill Cellar 3, which sold in under 12 seconds for US$130,000. Our second NFT release, linked to 300 bottles of 2018 Magill Cellar 3 sold out in under 10 hours. We look forward to seeing the response to our Superblend release,.”

In March of last year, Penfolds unveiled their first Collection of California Wines that extol an “other worldliness and something special.”