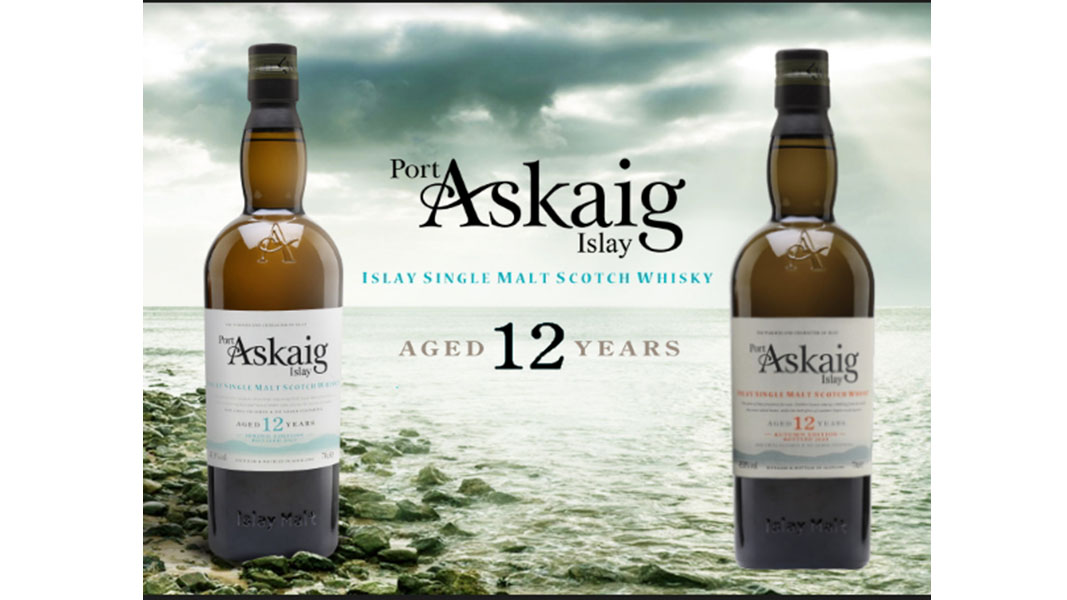 The Port Askaig 12-Year-Old Bourbon Cask contains distillate from 2006 and 2007 from the north-east coast of Islay and has been matured for over 12 years in ex-Bourbon Hogsheads. Non chill-filtered and bottled at 45.8% ABV, which head blender Oliver Chilton feels is the ideal drinking strength, 5,000 bottles have been produced for the world, with 720 bottles available in the US.

On the nose, this Scotch delivers the smokiness of peated malt fresh from the kiln, melding with a background of zesty lemon oil, sea breeze, and a maritime minerality. The palate features lemon sherbet and key lime pie accented by the sweetness of stone fruits. This blends with sooty smoke from a large hearth and boasts a toffee-led sweetness underneath. Rich, barbecued Persian black lemon and dried mint leaves linger with fresh turf. A touch of smoked paprika has the last word.

The Port Askaig 12-Year-Old Marriage of Bourbon and Sherry Casks is a marriage of Whiskies from nine refill American Oak Hogsheads, five Oloroso Sherry Butts, and three Solera Sherry Butts, combined to create a flavorful single malt with a medley of smokey, fruity, and coastal notes.  As with the Bourbon Edition, this Edition is non chill-filtered and bottled at 45.8% ABV to fully showcase its distinct Islay character. 9,000 bottles of the limited-edition release have been produced, with 360 bottles available in the US.

On the nose, the Whisky features crumbly Wensleydale cheese, dotted with cranberries, and evolves into smoky bacon crisps. Next, delectable cherry liqueur arrives along with the heavy succulence of boiled Christmas pudding, just set aflame. The palate offers a mélange of juicy red grapes and smoldering wood chips, with just a touch of dried seaweed, along with cherry tomatoes, left to confit in the oven a tad too long, and a smattering of hawthorn berries. The finish features salty and spicy notes – reminiscent of Tabasco sauce and smoked chipotle peppers.

“Having worked with Elixir for many years and knowing the process of cask selection we have been blessed to have several very special casks that have come out in limited releases over the years,” said Sam Filmus, President of ImpEx Beverages. “Many of these have achieved high praise from very well-respected reviewers around the world. Recently we had the privilege of having two exceptional 12-year-old expressions, one fully matured in Bourbon and the other a culmination of amazing Bourbon and Sherry casks. These two Port Askaig 12-year-old expressions are fantastic for special occasions and a true testament not only to the ability of Oliver Chilton to select amazing casks but his fine nose and taste to be able to pick these hidden gems from hundreds of casks he goes through when making selections for Port Askaig 8-year-old and 110 Proof.”