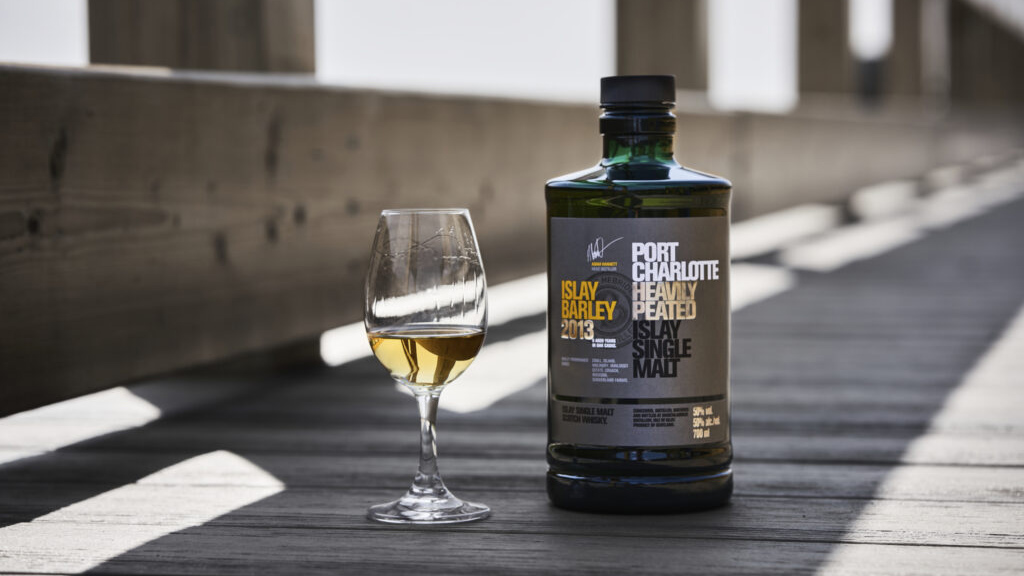 The Port Charlotte Islay Barley 2013 release is the fourth edition of heavily peated Islay-grown single malt released from the distillery. The farmers, Hunter Jackson, Iain McKerrell, Raymond Fletcher, Mark French, Alistair Torrance, Raymond Stewart and father & son team Donald and Andrew Jones have all worked with the distillery previously. Matured for a total of 8 years in ex-American whiskey barrels, 25% of the parcel was ace’d in first fill Pessac-Leognan French wine casks before being married back together for bottling.

The nose opens with delicate floral notes of lily and geranium before warm orange zest and dried earthy peat smoke brings body and gravity. Banoffee pie and digestive biscuit come out from behind the peat smoke and carry forward this dram’s malty, fruity character. The first taste finds salinity, fruit, light peat smoke, and the sweet oak showing their presence in a whirl of complexity. A subtle almond note combines with coconut, caramel, vanilla, and muscovado sugar, while the peat smoke is beautifully balanced. The finish again shows balance with smoke, fruit, oak and floral notes melting into each other, and a creamy texture allows melon, peach and cherry to come through before dwindling into the dry embers of peat in the hearth.

“There is something magical about how the Islay grown barley holds the smoke back for a moment until releasing it dramatically on the finish,” said Head Distiller Adam Hannett  about the new vintage.

In April, the distillery released Port Charlotte PAC:01 2011. The heavily-peated whisky “celebrates the convergence of French and Scottish provenance,” according to the Islay-based distillery, and will replace Port Charlotte OLC:01 2010.