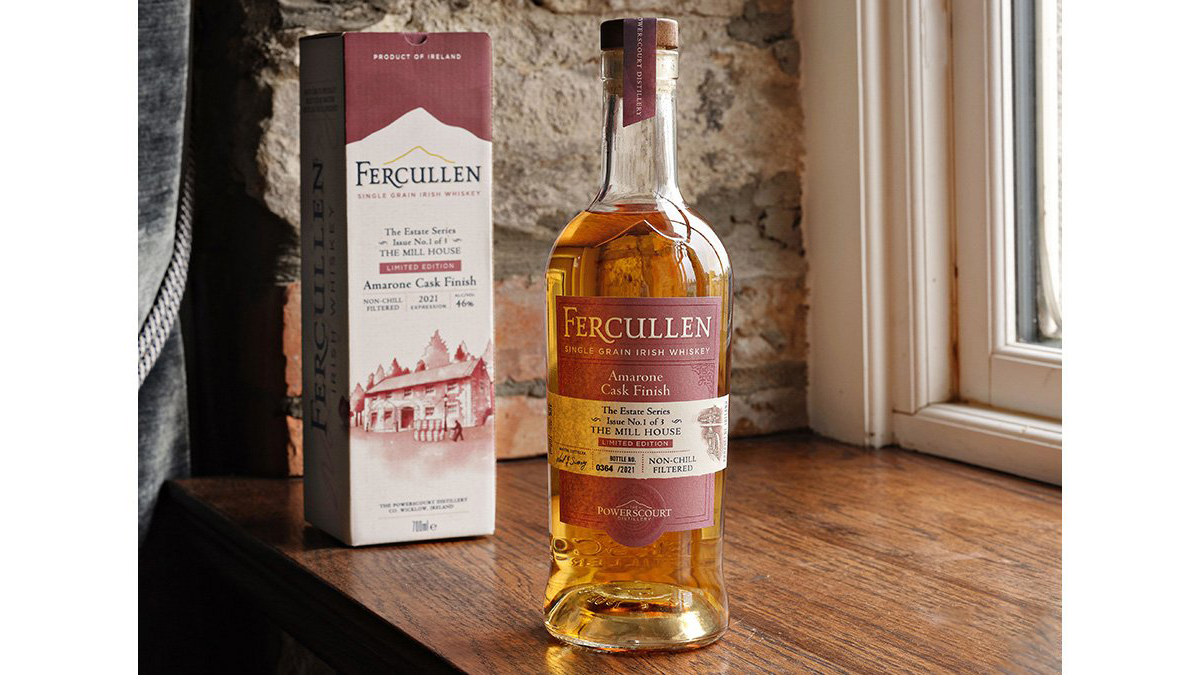 Powerscourt Distillery has introduced the first release in its Estate Series, The Fercullen Mill House Single Grain Amarone Finish. The new offering is the first of three Irish whiskeys set to be included in the collection.

The limited edition Fercullen Mill House blends single grain Irish whiskeys produced in 2010, 2011 and 2012 by Powerscourt’s master distiller and master blender, Noel Sweeney. The whiskey was initially matured in first-fill ex-Bourbon barrels before being finished for 18 months in Italian Amarone casks. It is non-chill filtered and bottled at 46% ABV.

On the nose, the whiskey delivers spice, liquorice, vanilla, then honey with a twist of lemon, ripe peach, kiwi, cinnamon, and oak. The palate is smooth and silky with flavors of honey, cinnamon, fruit cocktail, and light chocolate. The finish is described as, “long lasting sweetness from fruits and velvet texture; almost mouth-watering, yet a dry finish.

The whiskey is named after the distillery’s brand home and a historical focal point for the distillery, the 18th-century mill house. Part of the fabric of the Powerscourt Estate for 300 years, the water-powered Mill House was repurposed to become the distillery’s visitor centre, complete with the original turbine built by Craig and Sons in Belfast still intact. The clear spring water emanating from the nearby waterfall, which once drove the turbine, is now used to create the Fercullen whiskeys.

The purpose-built distillery also houses a modern high-spec mill where they mill every batch of malted barley or cereals for the single malt or pot still productions. Milling the barley in-house, allows Powerscourt Distillery to inspect the whole malted barley or cereal, and mill it to the specifications needed for each distillation. It also allows the distillery to carry on a 300-year-old tradition of milling barley grown on Powerscourt Estate.

The distillery also boasts an in-house modern grain mill, where its barley and cereals are processed.

Just 2,021 bottles of the whiskey have been created. It is priced at €75.00 and can be purchased via the distillery’s official website.