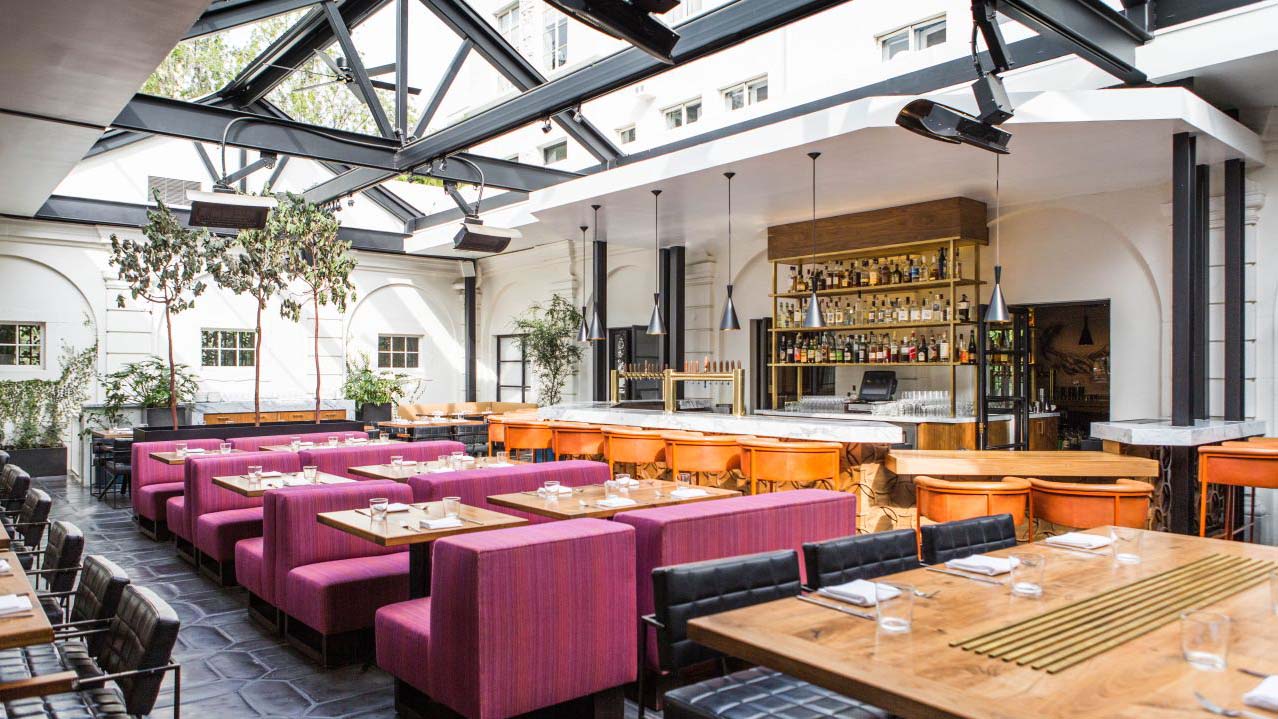 Inside the former rectory of the Cathedral of Saint Vibiana sits Redbird. The gable roof atop the dining room is one large skylight lined by black metal. The white marble bar is a full oval that’ s split down the center with one side facing the lounge and the other peering into the dining room. Plush booths are covered in rich red-magenta material.

Redbird is beautiful inside and out, and the time and detail taken in the creation of the space is reflected in the dishes and cocktails served to diners.

For over 100 years, St. Vibiana’s was the official cathedral of Los Angeles, but after sustaining considerable damage in the 1994 Northridge Earthquake, the building found itself embroiled in a protracted legal battle between the archdiocese and city. The matter was eventually resolved and Amy Knoll Fraser and Chef Neal Fraser are now the owners and operators of Vibiana, which is a private event space, and Redbird, the restaurant housed in the rectory.

Redbird opened in 2015 after nearly five years of work. It serves Modern American cuisine that highlights Los Angeles’ multi-cultural scene. Dishes are rich and seasonal, which means that depending on the night, diners will be able to find anything from a rib-eye to hamachi crudo to a variety of pastas. Brunch is served on the weekends and features an array of sweet and savory dishes that include foie gras as well as Basque baked eggs.

Tobin Shea has been at the helm of the bar since the beginning and he has put together a memorable list of shaken and stirred concoctions that highlight the history of cocktails while also managing to innovate. The bar menu changes seasonally, but visitors can always find thoughtfully crafted beverages with a similar spirit to the Washington and Jefferson (Rye Whiskey, aged Rum, Applejack, Madeira, honey, bitters). Everything featured in the cocktail could have been found in Thomas Jefferson’s cellar when he died.

Redbird helped bring the spotlight to Downtown Los Angeles’ drinking and dining scene, and for good reason. It is what refined drinking is supposed to be about. It nods to the past and uses the information gathered to innovate. The result is modern yet measured, and deserves appreciation.