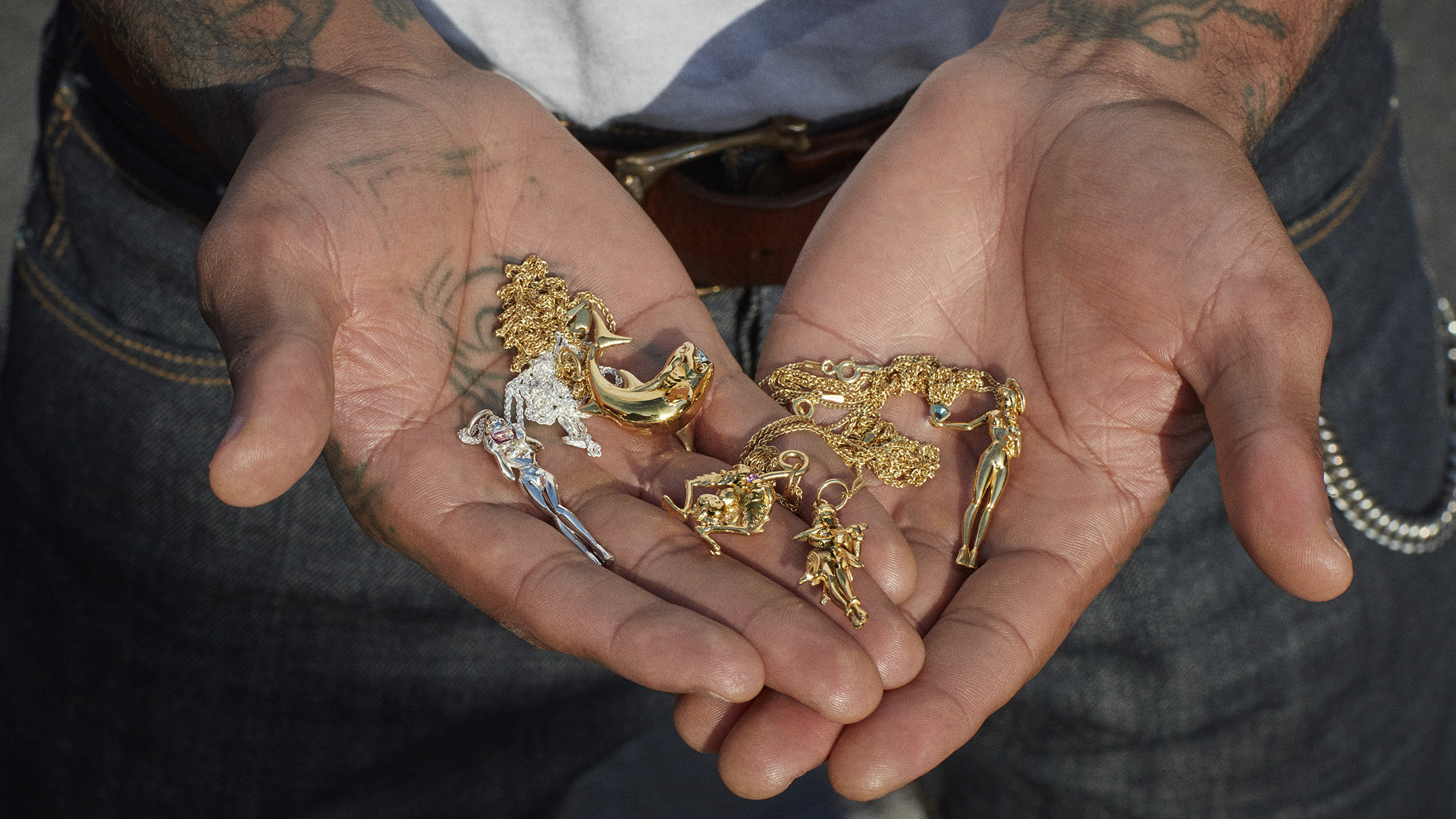 Sailor Jerry has teamed up with London-based jewellery brand Hatton Labs for a limited-edition capsule collection. The limited line honors the legacy of Norman ‘Sailor Jerry’ Collins, the man who inspired the Rum brand.

Through Collins’ refined, stylistic and iconic work from 1940-1970, Sailor Jerry combined vivid color, bold iconography and sheer artistic ambition to create a new kind of tattooing. These notions have been emulated wholeheartedly by Hatton Labs for a limited-edition capsule collection.

Finally, soft Sterling Silver pieces are finished with Amethysts – a nod to Sailor Jerry’s innovation and creation of purple ink in the tattooing world. Archives reveal that, in a bid to show up a rival artist, Sailor Jerry worked with an inking company to create, for the first time, Carbazole Violet; the first purple ink. The ink was only used on those he felt could be trusted with the secret of its origin.

Each flash icon in the jewellery collection has been meticulously selected by Hatton Labs from hundreds of Sailor Jerry archive iconography images and photographs to encapsulate classic Americana culture, while also nodding to the modern subcultures. Old-school tattoos are rooted in the American serviceman’s interpretation of traditions and symbols that go back thousands of years. Every tattoo or ‘Flash’ is a personal statement, but there are certain common meanings.

The Hula Girl, emblem of Sailor Jerry and recognised icon across the glob, has been finished as a jewellery piece with exquisite detail. From her traditional Hawaiian Lei to her Ti leaf grass skirt and guitar, set with a gemstone at its heart, the piece nods to Collin’s time living in Hawaii from 1930 and building his tattooing legacy.

The Monkey, named ‘Romeo’, is actually inspired by Sailor Jerry’s own pet monkey of the same name. Romeo was part of Sailor Jerry’s life as a sailor, stemming from the tradition of bringing home exotic pets from distant lands. Romeo was a constant source of entertainment to artists and guests, with an unsavoury habit of bending over and ‘mooning’ customers as they walked in, hence his cheeky gemstone placement.

The Pin-up Girls each clasp a stone in their hands and wear killer heels, dangling delicately from a long pendant. Pin-up girls represent the ideal and extremes of femininity — from maidenly perfection to vixen-ish temptation. The woman inked on a sailor’s arm would be the only feminine form he would see for months. Sailor Jerry’s bold, refined style of the pin-up is iconic the world over, and reimagined here in tough, solid metals.

The Shark Pendant and Shark Ring are the weightiest of the collection, cast in solid metal and featuring a huge emerald-cut gemstone bared in its enlarged jaw. Animal tattoos are about taking on its traits. A lion shows you’re brave, a panther shows you’re tough. But a shark is more about what you overcome and that you’re willing to stand your ground. It says you’re not about to become someone else’s seafood.

The Shark Pendant will be the only icon continued into early 2021, sold via Hatton Labs official website.

“Collaborating with Hatton Labs and supporting their craftsmanship to sensitively transform Norman ‘Sailor Jerry ’Collin’s iconic flash into physical 3D character icons – is not only a first for the brand, but real personal honor to play a part of this process and collaboration,” said Gemma Kane, Sailor Jerry’s Global Brand and Culture Ambassador.

“It’s a big honor to be able to work with the artwork of someone as pioneering as Norman ‘Sailor Jerry’ Collins,” said Hatton Labs. “The opportunity to bring some of his illustrations to life from 2D to 3D, being able to translate this imagery into precious metals and stones for the first time, it is like we’re creating a trophy and souvenir to Norman’s narrative and history. We are gifting to a select few people, for one time only and then that’s it, creating our own spotlight on Norman’s legacy for one short & special moment.”

The Sailor Jerry x Hatton Labs collection is available worldwide to purchase from the collection’s official website. Prices range between £185.00 to £7,500.00.