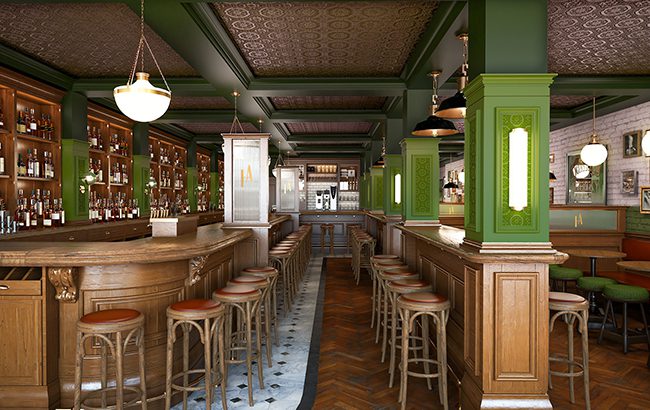 Sean Muldoon and Jillian Vose have left The Dead Rabbit in New York to open Hazel and Apple in Charleston, South Carolina. Initially, the space was set to be an expansion for the iconic New York bar, but now it will be opened as the first venture between the duo.

Set to open in late 2022 or early 2023 on 549 King Street, Hazel and Apple straddles two rooms and an outside space. The front room is taproom-esque–an Irish pub meets a diner– and named The Hazel, while in the back sits The Apple, a “cutting-edge cocktail bar.” Its name is inspired by a William Butler Yeats poem.

The interior will feature hazel wood with green and red tones taking inspiration from apples. The menu is expected to feature Irish/British fare that draws on local ingredients, including seafood.

Regarding his decision to depart The Dead Rabbit, Muldoon said, “The plan was, before Covid, to expand at a rate of one [site] every two years. During Covid our partners wanted to do a rapid expansion, six in three years, a site every six months, which I have a major problem with personally; I didn’t want that. People can do that and do it well. But it’s not who I am and it’s not what I want.

“I don’t belong there anymore; I was the brand person. It came to the point where I couldn’t do it any longer. I’m a creative person with new ideas.

“I think me and Jack as a partnership were at our best with Dead Rabbit and Blacktail. We were considering opening another bar at one point, which was meant to be a bridge between the average pub and the Cuban bar. That would have been three bars. My best is when you have three different types of bars.”