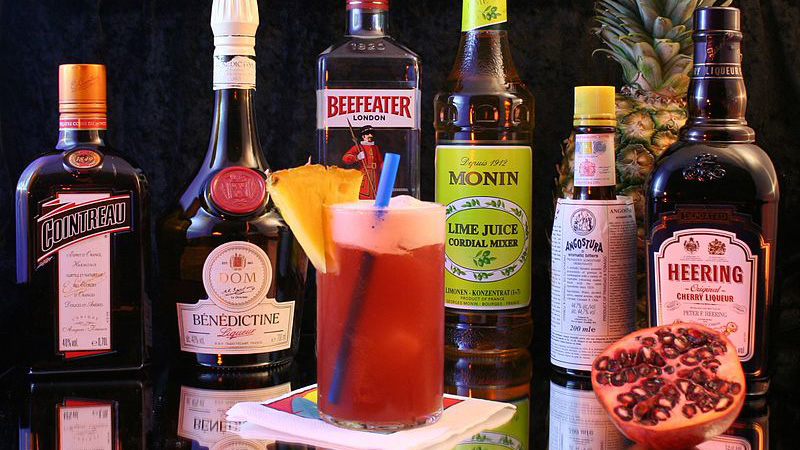 There’s a point in the classic 80s flick Cocktail where Tom Cruise’s character Brian Flanagan refers to himself as “the last barman poet,” and he spits out a variety of mixed drink titles, most of which have since lost their popularity, in a very loose rhyming scheme. One of those is the Singapore Sling, however, this cocktail has managed to keep its almost universal popularity.

A gin-based sling cocktail originally created at the Long Bar in Raffles Hotel, Singapore by Ngiam Tong Boon, the Singapore Sling was initially referred to as a Gin sling. We think of it as having gin, cherry liqueur, simple syrup, lemon (or lime) juice, and some bubbly water, but the actual recipe for the drink has become so muddled over the years that no matter where you order it, you’re likely to get something different. As D. A. Embury stated in the Fine Art of Mixing Drinks, “Of all the recipes published for [this drink] I have never seen any two that were alike.”

Pour gin, Benedictine, lime juice, and simple syrup into a cocktail shaker filled with ice. Shake well and strain into a highball glass over fresh ice. Pour in soda, then float cherry brandy on top by pouring it over the back of a bar spoon. Garnish with the lemon slice and cherry and serve.

In case you’re wondering, here’s Cruise’s entire poem: “I am the last barman poet / I see America drinking the fabulous cocktails I make / Americans getting stinky on something I stir or shake / The sex on the beach / The schnapps made from peach / The velvet hammer / The Alabama slammer. / I make things with juice and froth / The pink squirrel / The three-toed sloth. / I make drinks so sweet and snazzy / The iced tea / The kamakazi / The orgasm / The death spasm / The Singapore sling / The dingaling. / America you’ve just been devoted to every flavor I got / But if you want to got loaded / Why don’t you just order a shot? / Bar is open.”