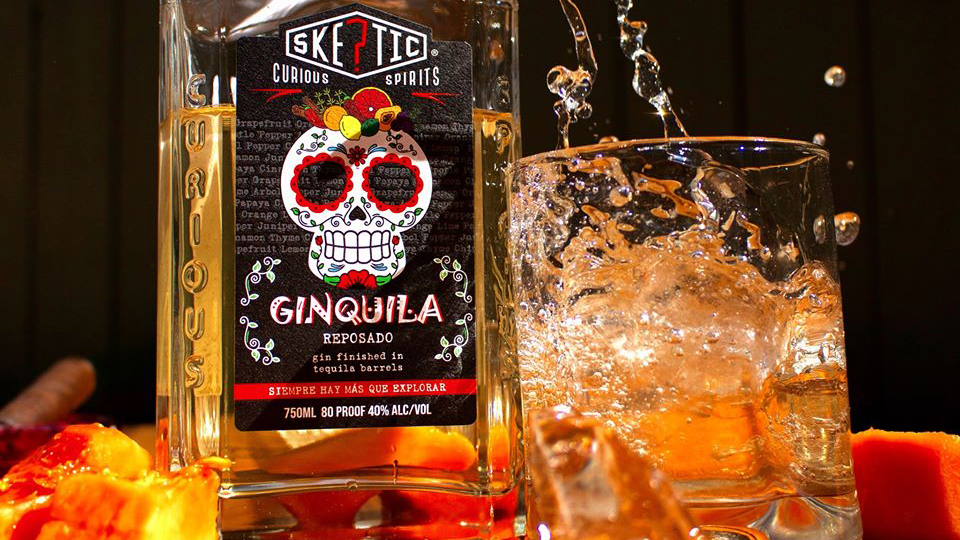 Skeptic Distillery has launched Ginquila, a new Gin that was finished in Tequila barrels. The Chicago-based distillery guarantees, “You’ve never tried anything like this one,” and we’re not going to disagree.

The spirited was inspired by a Paloma-style cocktail called the Cantarito, which is served in a claypot. Apparently, it is popular throughout the southwest. And while we’ve never seen the drink while passing through Grants or Sante Fe, or during an overnight in Phoenix or Albuquerque, we probably just weren’t paying attention.

the distillery infused a Gin base with tropical fruit and spices including papaya, grapefruit, orange, lime, cinnamon, thyme, and Chipotle and Arbol peppers. Then, they finished it in Tequila Barrels for seven months.

Coming in at 40% ABV, Ginquila is described as a “unique and versatile creation,” and we certainly would believe it is.

Like all of Skeptic Distillery’s other products, the gin is cold‐vacuum distilled to “ensure the utmost freshness and flavour profile,” naturally gluten free, free of unnatural additives, and suar free. The resulting liquid is described as having notes of citrus and mild spice.

It is recommended served over ice with grapefruit soda and fresh squeezed lime, or in a Tequila cocktail.

Ginquila is available in retail outlets in Illinois, Kansas and Arkansas with more states to follow. It is priced at $34.99 USD

Skeptic Distillery already makes a Gin and a Vodka, and after Ginquila, they are releasing a range of Whiskeys. The line will start off with a Whiskey made from a tropical double-IPA craft beer recipe, heavily dry hopped with New Zealand hops, as well as a Russian imperial stout with dense chocolate, coffee, cherry and vanilla flavors. All of their Whiskeys will be made from beers that are mashed, hopped, dry hopped and fermented to completion, such as high-gravity beers like Double IPAs and Russian Imperial Stouts via vacuum distillation.