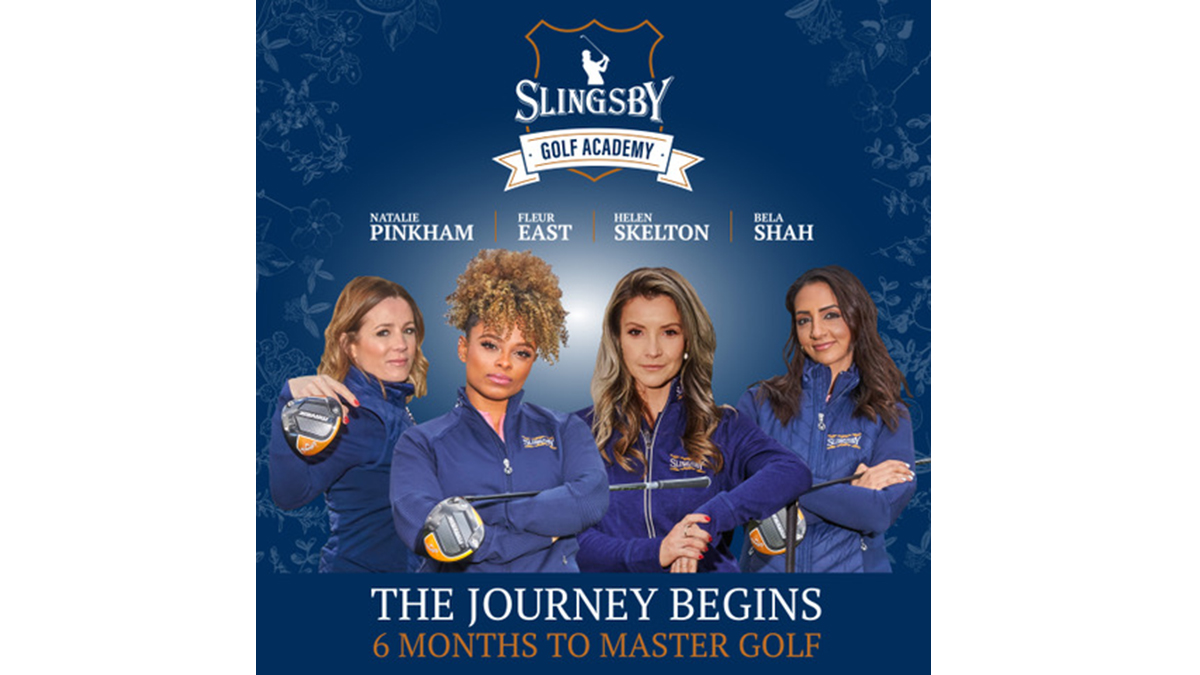 Slingsby Gin has launched its celebrity Golf Academy to encourage more women to take to the course in summer 2021. The announcement of The Spirit Of Harrogate brand’s new endeavour coincides with the reopening of outdoor sports in England.

Through the Slingsby Golf Academy, with the support of Callaway Europe, the four new cadets will work one-on-one weekly with a partner PGA Professional, who will help teach them how to play golf before competing against each other in a play-off to qualify for the BMW PGA Championship Celebrity Pro-Am.

During the the annual BMW PGA Championship, celebrities from across the worlds of sport, film, music, and broadcast come together to play the Championship’s star-studded Pro-Am at Wentworth Club, ahead of the Rolex Series event which features the world’s highest ranked English star, Tyrrell Hatton as defending champion. Former winners include Rory McIlroy, Danny Willett, and Francesco Molinari.

Slingsby wants to use the Golf Academy to champion female participation in the BMW PGA Championship Pro-Am, highlighting that golf is a game for anyone and influencing a non-traditional golf audience to pick up a club. The cadets’ journey will be featured in a novice to competitor five-part series capturing the highs, lows, and learnings as they take to the sport and train to compete for a place in the Pro-Am at the Wentworth Club on Wednesday, September 8, the day before the tournament tees off.

The winner of the Play-Off, taking place over Wentworth’s East Course the week before the BMW PGA Championship, will also receive a £5,000 bonus cheque from Slingsby to donate to a charity of their choice. With the support of England Golf and The PGA, Slingsby will use the series as a catalyst to provide information, beginner events and a pathway for those inspired to get into golf.

“We’re so pleased to have these four inspirational and influential women as part of our inaugural Academy,” said Marcus Black, co-founder of Slingsby Gin. “The enthusiasm and competitiveness Fleur, Helen, Natalie and Bela have shown already, despite the courses being closed has been incredible. They have been practicing their putting in the kitchen and swing in the back garden through lockdown. Alongside their Pro they are now raring to go. With their involvement in this campaign, we can let women know that golf is a sport that can be built into busy life schedules allowing you to be active and enjoy socialising with friends at the same time. Despite how you might hit it on the range or course, we know a G&T together after in the bar is the perfect remedy!”

When asked about her involvement in the academy, Fleur East said, “I like to be able to be able to inspire and create change, to be part of a movement. It’s really exciting to take on something new and be involved in something that’s bigger than me. I like to say I’m not competitive but the moment I’m faced with a challenge, something I can win, something I can compete in, then the fire is ignited within me!”

Helen Skelton commented, “People assume that I’m good at sport but I’m not good – I just give it a good try. I’m quite competitive with myself and if I agree to do something, I’m going to give it my all and don’t want to lose. My dad has always tried to get me into golf but working away and with young kids, I never carved out time to do these things for myself. Now is my Opportunity.”

Natalie Pinkham said, “Anything that gets participation up and gets women talking about sport and encouraging a can-do attitude is just brilliant. I’ll never forget going to a golf course many years ago and being told I wasn’t allowed into the bar, not because I wasn’t over 18 but because I was a woman. I’ve always been a feminist, a proud one and I couldn’t believe this. I remember going to my late grandfather and getting angry about the situation. His advice was that times are changing and to be patient. Finally, it feels like things are falling into place, as they should be.”

When asked what she is looking forward to most about the journey, Bela Shah said: “I talk a lot about sport and golf for my job, but I’ve not had the opportunity to play the game, so I’m so excited to learn the ropes myself. I’m excited about the physical side, getting stronger and learning how my body can work in a different way. It’s not just about winning for me; I want to learn how to do it, do it well and see the progression as I go through.”

BMW PGA Championship, Championship Director Kit Gartrell added: “We wish Fleur, Helen, Natalie and Bela the best of luck on their Slingsby Golf Academy journey and have no doubt they will soon love the game as much as we do! The Pro-Am has long been an exciting part of the BMW PGA Championship week, and we look forward to welcoming the lucky winner into the field.”

England Golf, CEO Jeremy Tomlinson noted: “England Golf is delighted to be supporting Slingsby’s celebrity Golf Academy and I am very much looking forward to seeing Fleur, Helen, Natalie and Bela take to the course!

“We at England Golf are committed to supporting and encouraging female participation in golf and sharing this vision in practice with Slingsby forms a hugely positive part of this. We have a dedicated team who work tirelessly in their quest to increase the numbers of women playing the sport we love.

“Breaking down the boundaries that many women face when wanting to get into golf is no easy task and I believe this documented series, will help us on our journey to eliminating the misconceptions about the game.”

Robert Maxfield, Chief Executive of The PGA said: “We are delighted that PGA Professionals are going to be helping Fleur, Helen, Bela and Natalie on every step of their golfing journey. Helping those who want to take up the game but don’t know where to start is what PGA Professionals do every day and this is a brilliant initiative that will undoubtedly inspire plenty more women to give it a try. We look forward to following their progress and hope they develop the same love for the game as we all have.”

The first episode of the Slingsby Golf Academy will be available to watch on Slingsby’s social media channels (@slingsbysocial) from April 6, with clips broadcast on Sky Sports through the journey.