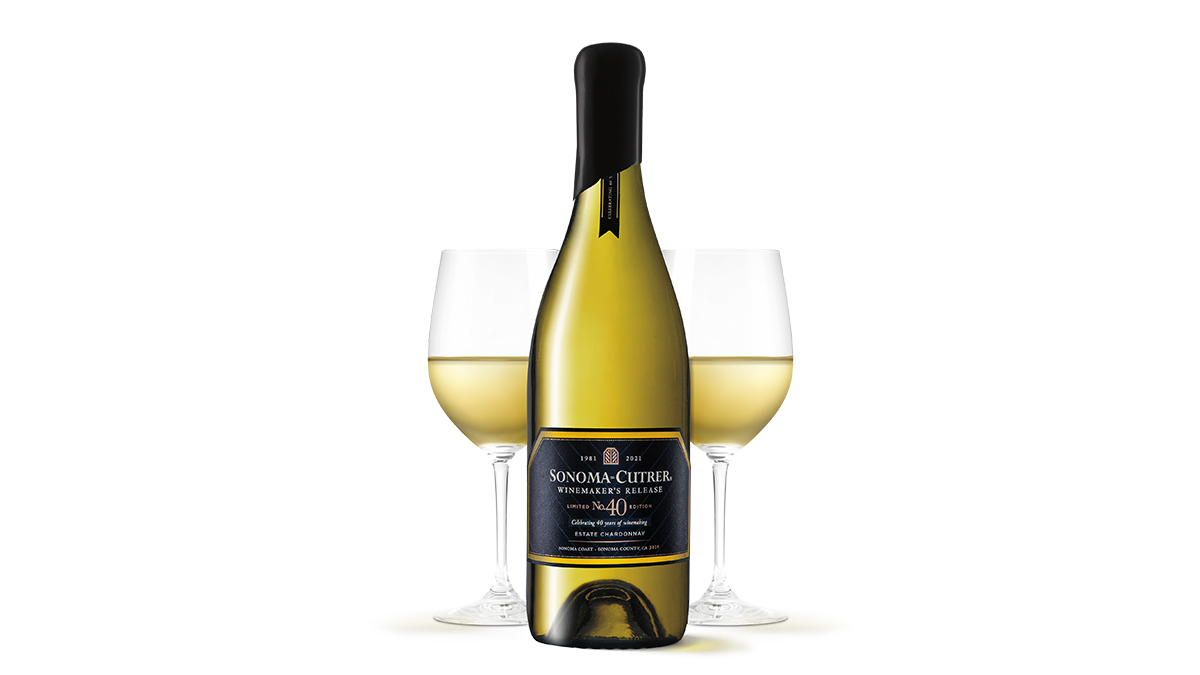 Sonoma-Cutrer has released its 40th Anniversary Chardonnay as part of its highly-anticipated annual Winemaker’s Release. Arriving in market at the beginning of May, this commemorative bottling celebrates the winery’s 40-year milestone in winemaking and represents a final collaboration between its founding and current winemakers.

In its four decades, Sonoma-Cutrer has consistently brought together top-tier talent whose winemaking talents and philosophy celebrate California’s ingenuity while honoring classic Burgundian traditions. To create this year’s Winemaker’s Release, Directors’ of Winemaking Bill Bonetti (1981-1990), Terry Adams (1991-2010), and Mick Schroeter (2010-Present) worked with Chardonnay Winemaker Cara Morrison (2005-Present) to blend a Chardonnay that pays tribute to the winery’s mastery of the variety.

“The 40th Anniversary Winemaker’s Release showcases Sonoma-Cutrer’s Chardonnay style of crisp acidity balanced by ripe fruit and oak complexity,” said Morrison. “Collaborating so closely with Bill, Terry, and Mick was a once-in-a-lifetime opportunity. It is a privilege to dedicate this beautiful wine to our visionary founding winemaker Bill Bonetti who passed away peacefully just a few months after blending, and to continue to carry on his vision.”

In selecting the fruit for this wine, the winemakers chose grapes from three closely spaced blocks of Sonoma-Cutrer’s estate vineyards, Les Pierres, The Cutrer, and Vine Hill, which allowed them to craft a varietal that expresses the winery’s classic style. In the cellar, Grand Cru winemaking techniques were used including minimal settling, bâttonage and sur lie aging for 10 months. The wine was fermented and aged in new and used French oak sourced only from the Orleans Forest in central France. Sonoma-Cutrer’s longtime partners the Gauthier family purchased, split, milled and seasoned the wood, and under the winery’s strict guidelines, the barrels were produced by Remond, Rousseau & TW Boswell Cooperages.

The Sonoma-Cutrer Winemaker’s Release 40th Anniversary Chardonnay presents aromas of ripe pear, citrus zest, and baked apple, with light mineral notes and a touch of matchstick for complexity. Layers of spice, caramel, nougat, and pie crust are integrated throughout. Melon and Bosc pear along with lemon meringue flavors mingle with hints of nutmeg, clove, toasted nuts, and oak. The wine strikes an exceptional balance between being full-bodied and delicate, with a creamy mouthfeel highlighting the winery’s signature citrus acidity.

Bottled at 13.9% ABV, Sonoma-Cutrer’s Winemaker’s Release 40th Anniversary Chardonnay is priced at $69.99. For more information, head over to the official website.