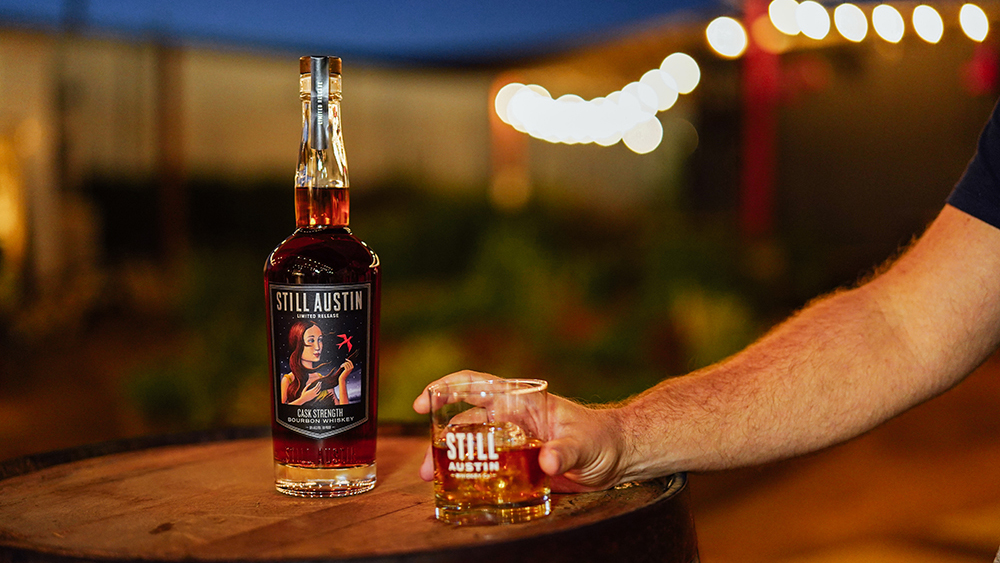 The drink is now available at the Still Austin Distillery Tasting Room and in on- and off-premise establishments throughout the lone star state.

Distinguished from the company’s Distillery Reserve Series which ordinarily yields up to 600 total bottles and is only available at the Tasting Room, the Cask Strength Bourbon is a limited-release. This means a larger quantity will also be available in the marketplace.

Made from 100% Texas grains, the new expression contains the same mash bill as the company’s flagship straight bourbon whiskey – 70% Non-GMO white corn, 25% Elbon rye and 5% wildfire malted barley – but without utilizing the slow water reduction process, resulting in a higher proof. The suggested retail price for a 750ml bottle is $65.

Master Blender Nancy Fraley was called on board by Still Austin Whiskey Co. to search through their barrels of Straight Bourbon and select the most complex and flavorful ones. those that were begging to be blended and released at “barrel proof,” meaning the whiskey was bottled at the same proof at which it was aged. The resulting spirit is a masterpiece of complex, dark flavors with a deep spice finish.

The artwork on the label, created by internationally acclaimed artist and native Texan Marc Burckhardt, is a slightly modified version of the Straight Bourbon artwork, a series which portrays “archetypical” Austinites. Each provides a sense of the people who have influenced and inspired the team, while paying homage to the Texas terroir. While the Cask Strength bottle also features The Musician, the black night sky is meant to be representative of the stronger, “darker” whiskey.

Still Austin is an independent craft whiskey distillery founded in 2015, focusing on a true grain-to-glass concept that produces the highest quality whiskey by perfecting every part of the process and using local resources and sustainable practices. The team is committed to carrying out each part of the process in-house. That means never sourcing whiskey from another distillery, and instead always hand-making everything from scratch, and managing everything in-house – milling, mashing, fermenting, distilling, barreling and bottling.

The Still Austin distilling team is led by Head Distiller John Schrepel, Master Blender Nancy Fraley and veteran Master Distiller Mike Delevante, one of the most experienced and respected distillers in North America who designed the distillery to make the highest quality of bourbon. That includes a 42-foot custom-made column, “Nancy,” (and her sister copper-pot still, “The Queen”) which give the distillers serious creative license to create unique new flavors and spirits. The team also uses Texas weather to its advantage. The region’s high heat, humidity and rapidly shifting temperatures encourage spirits to move rapidly in and out of the oak barrels and mature relatively quickly—but, if this process is left unchecked, it can also cause the bourbon to have heavy oak flavor or harsh tannic qualities. To prevent this, Still Austin uses a meticulous slow water reduction technique focused on flavor and balance, which gives the alcohol a softness on the palate and brings more “mature” notes to the forefront.

For more information head over to the brand’s official website.