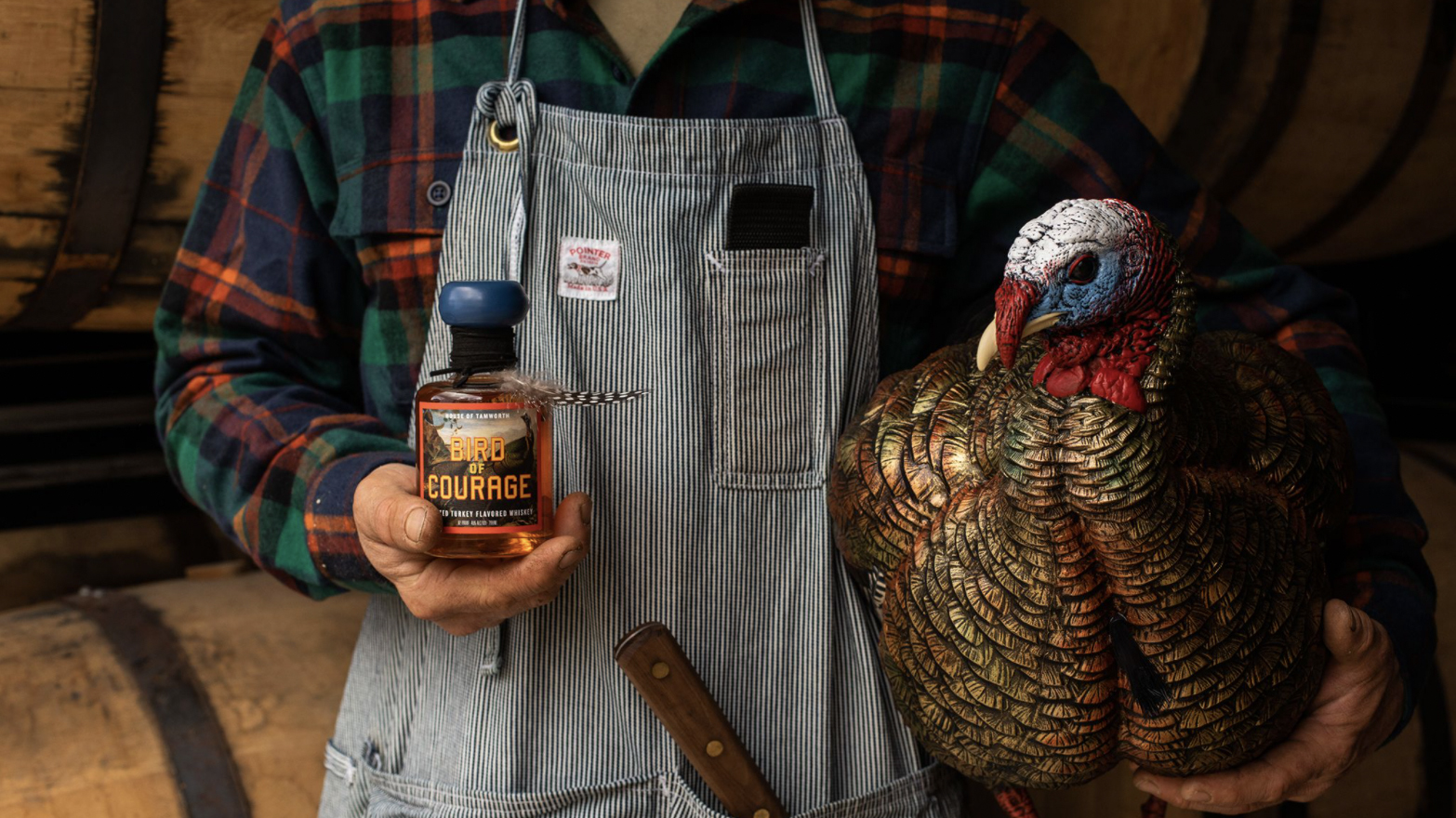 Steven Grasse and Tamworth Distilling, the makers behind Deerslayer Whiskey, have unveiled a roasted turkey-flavored whiskey, Bird Of Courage. The new offering will be made available in November.

This brand-new limited-edition tryptophan-free whiskey was birthed from a barrel of 5-year-old Bottled in Bond Whiskey (12% rye, 81% corn, 7% malt) and was steeped with a (mostly) historically accurate and quintessential New England Thanksgiving dinner. Distiller Matt Power utilized ingredients present at the first thanksgiving 400 years ago such as flint corn (in which he used to make hand-ground corn bread) and even sourced local chestnuts (a feat as they were highly prevalent at the time, but entire east coast forests died in the 1930’s when they were wiped out by the chestnut blight). Apples and cranberries were sourced from Sugar Hill farm in Maine and kabocha squash from a New Day Farm in Conway, NH. Celery, flint corn, and parsley made its way into the bottle from Mountain Heartbeet Veggies in Effingham, NH., and apples and cranberries were foraged from local trees and wild cranberry plants walking distance from the distillery, meanwhile fresh sage was plucked from the Tamworth Distilling’s backyard garden.

While sweet potatoes and stuffing were likely not present at that historic day (and the turkey was probably pretty dry) they were still added; and while wild turkeys do in fact roam about rural New Hampshire, the birds were sourced from a turkey farmer right across the river and historical landmark in Tamworth,  Behr Farm.

“All of the ingredients were cooked uniquely and infused into the bourbon before being distilled individually on our vacuum evaporator. The essence of the production strategy was to process every ingredient in the manner that they would be prepped for a real Thanksgiving dinner,” said Power. “So, the turkey was basted while roasting, the corn bread was baked until just right, and the stuffing recipe I used tasted just like my Mom’s! Everything was distilled fresh from the oven so we could capture the true essence of Thanksgiving.”

This attention to detail resulted in festive fall flavors that bring the complex nuances of 5 Year Aged Bourbon a flight. The sweet essence of roasted sweet potato and squash combine with the buttery heart of fresh baked flint corn bread to fortify this whiskey’s deep oaky spirit. A mid-palate of sweet, New England apples and herbaceous herbs support the aromas of several freshly roasted turkeys.

The name, “Bird of Courage” comes from Ben Franklin. “Franklin argued that the turkey would have been a more appropriate national symbol than the eagle,” said Steven Grasse, historian and Tamworth Distilling founder. “Franklin was quoted as saying the turkey was a much more respectable bird and a true native of America, first dubbing the turkey as a ‘bird of courage’ that ‘would not hesitate to attack a grenadier of the British guards who should presume to invade his farmyard with a red coat on’. Unfortunately, congress was not convinced, however, and the eagle persisted as our national symbol.”

The brand will be raffling off a friendsgiving dinner to be enjoyed at the Tamworth Distilling Lyceum (or pick up) –  complete with bottle of Bird of Courage. All of the proceeds will benefit the National Wild Turkey Federation (NWTF) in support of their dedication to the conservation of the wild turkey as well as sustainable hunting practices.

Bottled at 46% ABV, Bird of Courage is available for national distribution through www.seelbachs.com and in limited quantities from Tamworth Distilling in New Hampshire and at Philadelphia’s Art in the Age.