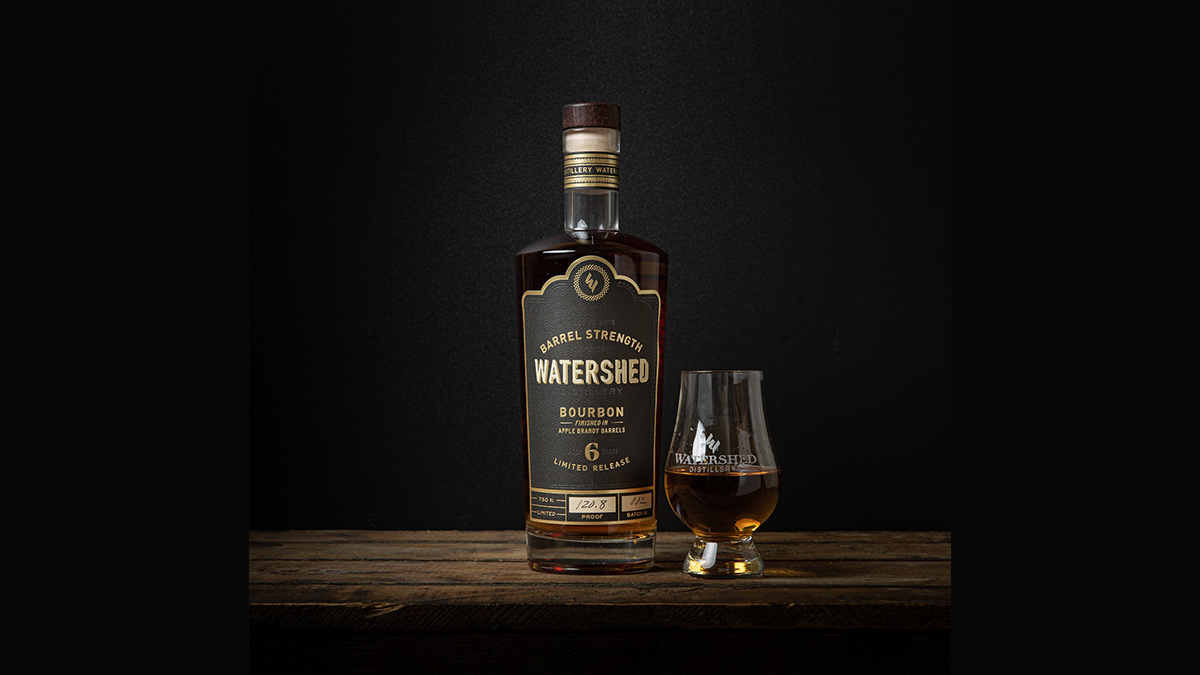 Watershed Distillery has announced its most mature spirit to date—a highly limited barrel strength bourbon. The 2021 Watershed Barrel Strength Bourbon Batch 002 follows the release of Batch 001 in September 2020 for the distillery’s 10-year anniversary, which sold out in under three hours.

Created from some of the last remaining barrels of Watershed Distillery’s original five grain mash bill of corn, wheat, rye, barley, and spelt—an ancient grain grown primarily in Ohio and a nod to the distillery’s craft roots—Barrel Strength Bourbon Batch 002 was made from copper pot-distilled bourbon aged four years in virgin char #4 White Oak barrels and finished for 34-45 months in Watershed’s own Ohio apple brandy casks. Bottled without chill filtration at 60.4% ABV, the whiskey was distilled, aged, and bottled on-site, and represents the oldest bourbon ever released by Watershed Distillery.

“When selecting the barrels for this batch of our Barrel Strength Bourbon, our Barrel Master Anne Dimmick and I set out to highlight the true depth and complexity of the bourbon we makeat Watershed Distillery,” shared Head Distiller Aaron Harris. “We are always looking for that ‘magic’ in a barrel—a rich and bold bourbon with balanced sweetness that truly stands apart from the rest, and we think Batch 002 captures that perfectly.”

The whiskey offers aromas of dark brown sugar caramel, roasted oak, and rich vanilla. The palate brings with it a full-bodied rich viscosity, with notes of fig, peripheral spice, and a touch of black cherry and toasted nuttiness. The finish is described as “robust and balanced with lingering complexity.”

To celebrate the limited release, Watershed Distillery will host a special preview dinner, “The Evolution of Character”, on Thursday, September 16. This event will feature a curated menu by Executive Chef Jack Moore, and allow attendees to experience the journey this particular bourbon took from grain to glass. All dinner participants will have the opportunity to purchase up to two bottles of Watershed Barrel Strength Bourbon Batch 002 in advance of the public release on Saturday, September 18.

This limited release is the latest offering in Watershed’s premium family of aged spirits. This summer, the distillery moved to a fully-aged stated bourbon portfolio with the launch of Watershed Bottled-in-Bond Bourbon and the relaunch of their flagship Watershed Distillery Bourbon as a 4-6 year blend of three bourbons..

Just 3,060 bottles of Watershed Barrel Strength Bourbon Batch 002 will be release to the public and will be available at Watershed Distillery on Saturday, September 18, before making its way to select retail outlets across the nation. The whiskey is priced at $89.99.