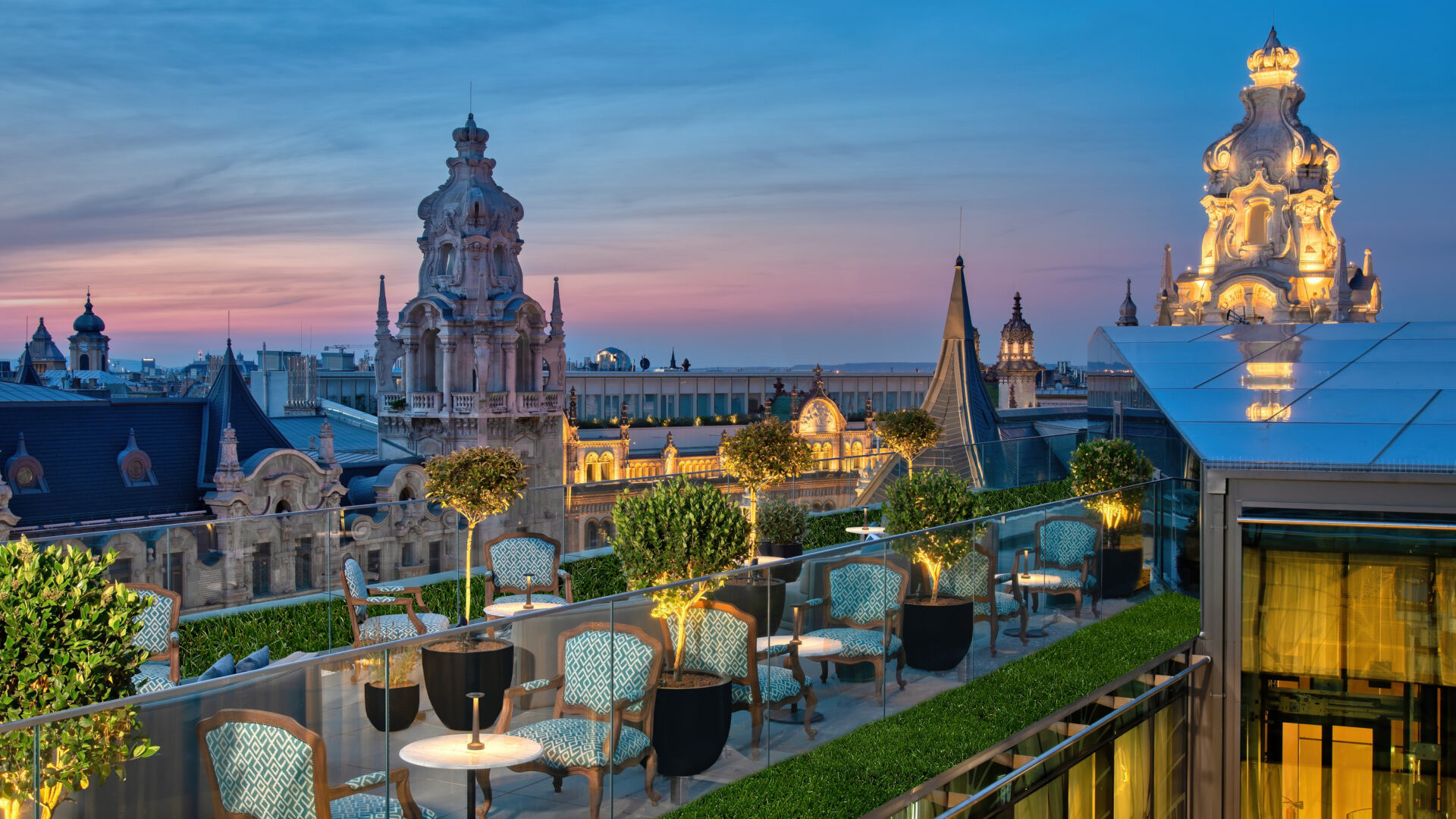 At the end of June, Marriott International opened Matild Palace in Budapest with Wolfgang Puck overseeing all dining operations, including a new Spago and The Duchess rooftop bar. Now, the decadent drinking hole with its secret liquor library and views across the Pearl of the Danube has opened to the public.

Listed as a UNESCO world heritage site, Matild Palace was built 120 years ago during the Belle Époque era and was developed under the patronage of Her Imperial and Royal Highness Maria Klotild of Saxe-Coburg and Gotha to serve as the social hub of the city. The Palace was part of her vision to create two baroque palaces, acting as a gateway to those entering the ‘Pest’ side of the city from Elisabeth Bridge. Before opening, the property underwent a meticulous five-year transformation led by award-winning interior designer Maria Vafiadis and acclaimed local architects Péter Dajka and Puhl Antal to become a 130-guestroom luxury hotel.

Vafiadis ensured the next chapter of the building honored its Hungarian heritage through stunning décor that reflects the hotel’s remarkable location in the heart of Budapest, just a stone’s throw from the Danube. The design celebrates the building’s famed past as a thriving social destination in the city, while creating a modern elegant ambience for discerning locals and global explorers alike to create enduring, treasured memories.

Among its many gems is The Duchess, a rooftop bar that points directly to the the palace’s developer, Her Imperial and Royal Highness Maria Klotild. She asked Floris Korb and Kalman Giergel, Matild’s famed architects, to set up a glamorous rooftop hideaway as a rendezvous for the Decadence Movement, where she could share “joie de vivre” with the socialites of the city. It is in this space that bar and its secret liquor library celebrate revelry.

Come late night, The Duchess transforms into the hottest scene in town where DJs’ chill tunes are juxtaposed with spectacular fireworks. The previously mentioned cocktails, champagne, and high-end spirits blend with the space’s raw bar menu to create a vibrant space above the Danube River.

Along with The Duchess, Wolfgang Puck is also overseeing a new location of his iconic Spago restaurant. The menu offers traditional Hungarian cuisine with a modern twist through recipes inspired by the produce of the region. Additionally, Matild Café & Cabaret will open in September, which is a dramatic re-imagination of the most popular address for the high society of the Belle Époque era. Both spaces will offer year round outdoor dining on the charming streets of Budapest, marking the first ‘gastro street’ in the city.

Matild Palace is part of Marriott International’s The Luxury Collection Hotels & Resorts and offers 111 elegantly appointed guestrooms and 19 suites, with many providing spectacular views of the city or the Danube River. The four guestroom categories each take inspiration from The Duchess’s exuberant lifestyle and early 20th century Budapest. Each bedroom is over four meters in height and celebrates Hungarian culture throughout with delicately handcrafted headboards, traditional fishbone parquet floors and lavish spa-style bathrooms inspired by the iconic thermal baths of Hungary. A thoughtful color palette of teal, green, gold, and copper decorates the rooms, reflecting the hues of the iconic Budapest roofscape. The hotel offers many connecting family rooms for multi-generational city breaks.

Swan Spa at Matild Palace features a Hungarian-influenced wellness experience with traditional thermal therapy and Hammam rituals designed to awaken guests’ senses. Complete with a salt and steam room the spa will exclusively offer ESPA products for all spa treatments. For those looking to keep active, there is also a fully equipped state-of-the-art gym.

Rates start from $530 USD per room, per night and includes breakfast. For more information or to book a stay, head over to the hotel’s official website.

For more information The Duchess, head over to the bar’s official website.