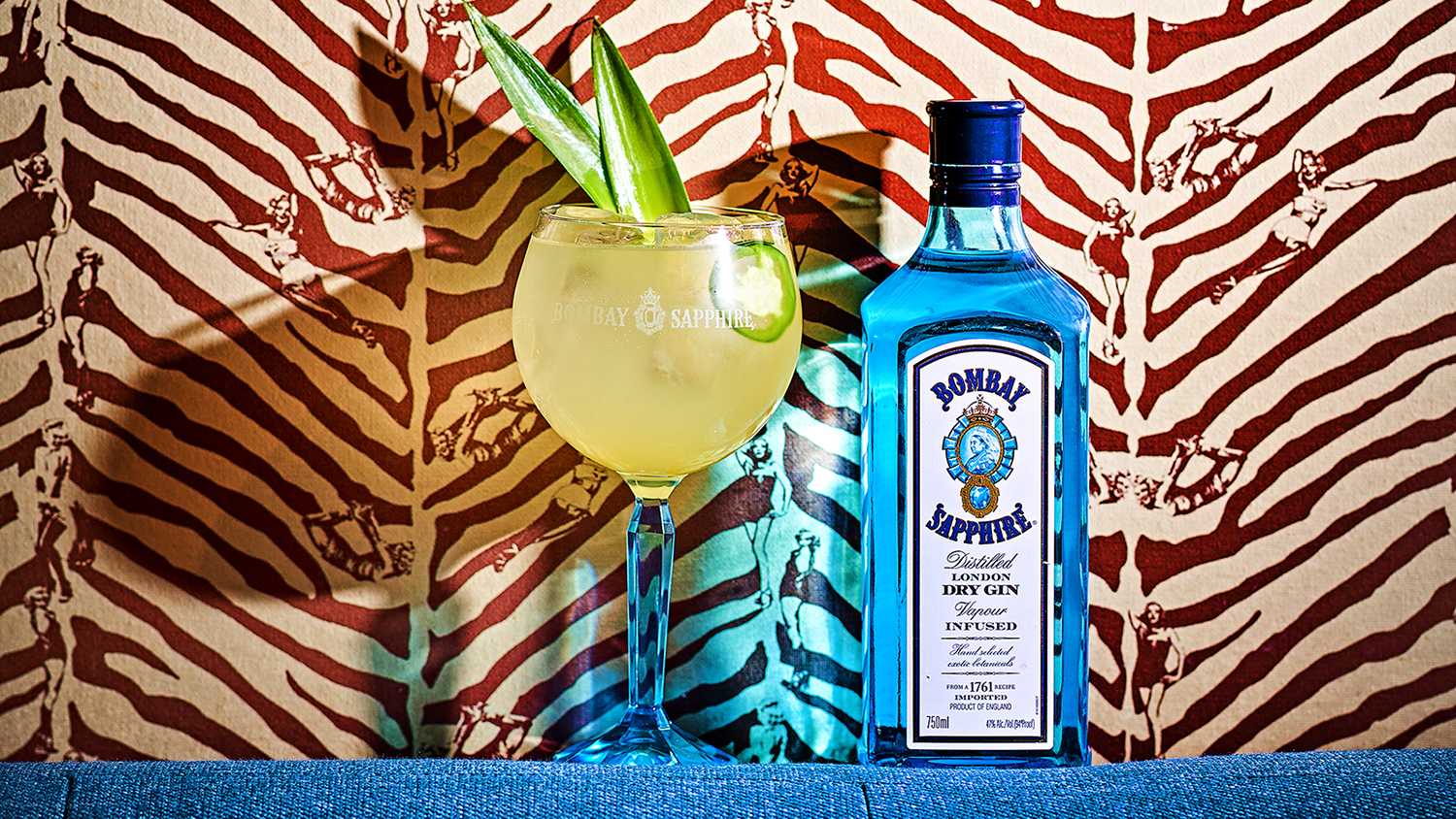 Bombay Sapphire and the Basquiat Estate have announced a partnership, naming the gin brand the “Official Spirits Partner” of the Jean-Michel Basquiat: King Pleasure Exhibition. Bombay Sapphire will join the Basquiat Estate to celebrate its first ever family-run exhibit in New York City opening April 9th at the Starrett Lehigh Building, where over 200 never-before-seen pieces and rarely shown paintings of the artist’s work will be on display.

To crown the partnership and exhibit, Bombay Sapphire will honor Basquiat’s formidable vision as an artist, starting with the official cocktail of the Jean-Michel Basquiat: King Pleasure Exhibition, aptly entitled “King Meets Queen”. The cocktail was inspired by Basquiat’s use of bold colors and sharp lines, featuring Bombay Sapphire gin complemented by pineapple puree, lemon juice, honey, and tonic.

For those who are unable to attend the exhibit but still want to experience the majesty of Basquiat’s oeuvre, Bombay Sapphire has also created a trio of collectible ‘Bombay For Real’ Special-Edition cocktail kits on CocktailCourier.com that will launch once a month until July. As “for real” was a signature catchphrase Basquiat used to express enthusiasm, each ‘Bombay For Real’ kit will feature a cocktail recipe from a bartender, inspired by one of Basquiat’s exclusive artworks at the exhibit. The kit will be accompanied by a notecard that showcases a photo of the original work and a quote from the bartender.

Inspired by Basquiat’s “Charles the First,” Bartender Cyllan Hicks from New York City created the “Birds of Paradise” kit, moved by the warm colors, this cocktail is comprised of apricot and orange flavors, complemented by Bombay Sapphire which will be available from April 7 through May 7. Andra “AJ” Johnson from DC created the “Basque in the Moonlight” (May 7-June 7), drawing from the renowned artist’s background, with a blend of tropical flavors that balance out the Bombay Sapphire, allowing each to shine through just as bright as the moon does in Basquiat’s “Untitled (Moon).” To round out the offering, Bartender Nigal Vann from Chicago created the “Sprout in Pisces” kit (June 7-July 7), that evokes the painting’s vibrant colors through herbaceous, spring flavors, inspired by Basquiat’s work “Untitled”.

Like Basquiat and his sisters, the brand has a longstanding history in heroing diverse voices and fostering creative self-expression. From holding its first-ever Sensory Auction, which was designed to help democratize the art world, to collaborating with visual artists Cey Adams and Dianne Smith to turn staid billboards in Harlem into works of art, Bombay Sapphire constantly strives to create alternative pathways to champion equal representation in the arts.

“We are thrilled to announce this partnership with the Basquiat Estate to celebrate Jean-Michel Basquiat’s new exhibition, as it upholds our longstanding history of supporting artistic visionaries and our mission to make the art world more accessible,” says Jaime Keller, Brand Director Bombay Sapphire North America. “Through this partnership, Bombay Sapphire aims to foster creative expression by supporting the Basquiat Estate in their efforts to unveil an unparalleled collection of never-before and rarely-seen artworks created by the legendary artist and sharing them with the world. We were moved to partner with Basquiat’s family on the exhibition as it takes the legendary artist’s work out of traditional white wall galleries, in favor of showcasing a more intimate side of the iconic artist’s story. The exhibition offers Basquiat’s biggest supporters and creatives from all over the globe a look into his life through his artworks and memorabilia including sketch books, early drawings, and sculptures. Alongside supporting the exhibition, Bombay Sapphire will continue to champion Basquiat’s legacy, through our limited-edition kits, signature cocktail, and more. This builds on our brand’s DNA and reputation for being the perfect canvas for creativity in cocktails and beyond.”

Basquiat’s sisters, Lisane Basquiat and Jeanine Heriveaux, who run the Jean-Michel Basquiat Estate added: “It’s an honor for us to work with Bombay Sapphire as a partner to help open the new Jean-Michel Basquiat: King Pleasure Exhibition in NYC. Their support and appreciation of diverse voices in the arts was important for us in bringing Jean-Michel’s work to life in unexpected new ways and to a greater audience for those who can’t attend the exhibit, such as the collectible kits. Together we hope to awaken creativity in people from all walks of life, which is what Jean-Michel endeavored to do in his own art,” said Lisane Basquiat and Jeanine Heriveaux.

Build ingredients in balloon glass with fresh cold draft ice. Garnish with two pineapple top leaves and a few slices of jalapeno (or other pepper) in the drink.

For more information, head over to Bombay Sapphire’s official website.