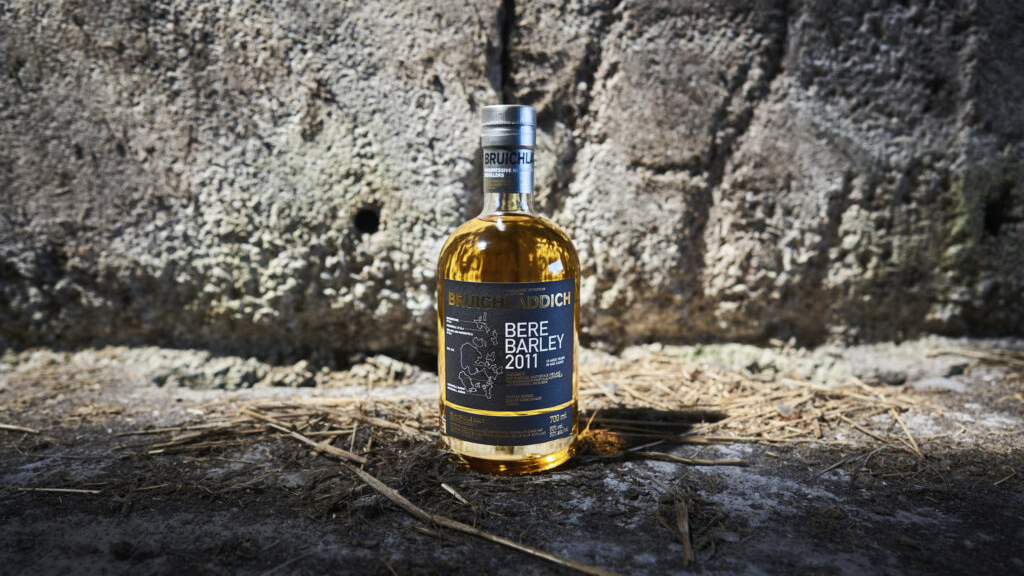 Bruichladdich Bere Barley 2011 is made from 100% Bere barley grown and supplied by the Agronomy Institute of Orkney College (UHI) in 2010. It is an unpeated malting and used Mauri and Kerry yeast strains. Distilled in 2011 as a single vintage expression, the whisky aged in first-fill American oak Ex-Bourbon Casks for 10 years – a mixture of Jim Beam, Jack Daniels, and Clermont Springs.

The nose opens with a bouquet of sunny floral aromas, including geraniums and orange blossom followed by mint and chocolate limes. This is followed by notes of malted barley, a citrus tang and apricot jam along with creamy richness. On the palate, the delicate nature of this whisky is evident with light hints of chocolate, apricot jam and citrusy, herbal zephyrs. Yet, the texture shows robustness in its viscosity as it settles across the tongue. As the barley sugar opens up, expect flavors of chocolate lime, fudge, dried banana chips, vanilla, marshmallow, apricot jam, gooseberry pudding, and malted bread. The finish finds marine freshness coming through with salinity on the lids and a stiff sea breeze note.

Bruichladdich have been working in partnership with Orkney College since 2005. Among their multitude of ongoing barley projects, distilling Bere first set out to “champion flavor over efficiency and homogeneity,” says a press release. The early years of the project saw farmer, agronomist and distiller work together to raise Bere on Bruichladdich’s home of Islay. It would move to Orkney in later years where it would thrive under the watchful eye of Peter Martin and John Wishart.

In recent years, Bere has played a part in trialling new grains on Bruichladdich’s 30 acres of croft land, which is dedicated to research and development. The trial plots contained a hybrid of Bere and modern varieties, reasoning that a cross would select beneficial characteristics of both varieties. While the first trials became victim to a mismanagement of weeds, future trials could help unlock favourable flavors and yields, which are important for distillers and farmers respectively.

Experiments aside, a successful crop of Bere was harvested on Orkney in 2010 by Magnus Spence, Sydney Gauld, and John & Peter at Orkney College. The labor of their hardship was distilled at Bruichladdich in 2011 and is released today at ten years old.

“Wherever our barley projects take us in future, we’re thrilled to have a back catalogue of flavourful and esoteric spirits in our warehouses,” said Adam Hannett, Head Distiller at Bruichladdich Distillery. “There is something unique about Bere barley spirit and this 2011 vintage is no exception. It has a tremendous depth of flavour that really magnifies the DNA of Bruichladdich spirit and shows such complexity. It is another remarkable vintage and exploration of provenance and terroir that shows not all barley is equal.”

Bruichladdich Bere Barley 2011 will replace the 2010 edition currently in the distillery’s unpeated Barley Exploration series. It is bottled unchillfiltered and colouring free at 50% ABV and is available at specialist retailers and online at the brand’s official website.

In April, the distillery released Port Charlotte PAC:01 2011. The heavily-peated whisky “celebrates the convergence of French and Scottish provenance,” according to the Islay-based distillery, and will replace Port Charlotte OLC:01 2010.

In March, Bruichladdich unveiled the first release in its Micro Provenance series of single cask whiskies. The Rémy Cointreau-owned distillery debuted the collection in Singapore and Malaysia.