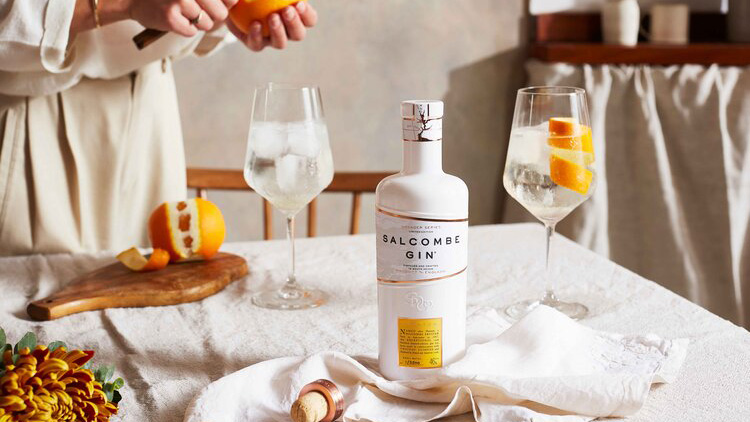 Salcombe Gin has teamed up with Chateau Climens to create the sauternes cask finished Phantom Gin. This new limited-edition Gin from the English spirits brand is the sixth in Salcombe Gin’s Voyager Series, a collection of limited-edition gins, each developed in collaboration with an iconic winemaker or world-renowned chef, to reflect their individual personality and style.

Phantom Gin gets its name from one of the Salcombe fruit schooners built in the Devonshire port in 1867 and is inspired by the fogs that help create the conditions for noble rot and the local schooners that used to ply the seas with cargoes of fruit, spices, and wine.

Phantom Gin tells the story of the vineyard, the winemaker, the cask, the distiller, and the concept of terroir, taking drinkers on a journey to an unhurried world that requires time, precision, patience and craftsmanship to be expertly pursued in the name of taste.

Long a fan of Chateau Climens, Salcombe Gin’s co-founder, Angus Lusgdin, approached the owner of Château Climens, Bérénice Lurton, with the idea of a collaboration.

“As a long-term admirer of Sauternes wines, it was an enormous privilege to work in collaboration with Bérénice Lurton and Frédéric Nivelle of Château Climens,” said Lugsdin. “Often mistakenly overlooked in favour of the more famous Château D’Yquem, the wines from the bio-dynamic estate of Château Climens are fresher and softer, with more finesse and grace.”

Lurton added: “When Angus first visited Climens and explained his idea, we were totally hooked. I was fascinated by Salcombe Distilling Company’s story. We both share a deep respect for the history of winemaking and distilling, and a commitment to exceptional craftsmanship.”

According to Salcombe’s tasting notes, the Gin features “notes of honeyed peaches, rose petals, cypress, lavender and orange blossom on the nose. Notes of apricots, jasmine, toasted oak, spices and caramelised orange peel follow on the palate. There is a fresh green savoury hint from the nettle and fennel making it light but enhancing the depth of flavour. The finish is acacia honey and cantaloupe melon, balanced with the minerality of fresh orange peel pith.”

“The overall result is quite simply stunning, added Lurton. “‘Phantom’ effortlessly sits alongside our wines reflecting the same care and attention to detail that we put into everything we do.”